With the top football seasons underway, we are giving you an extended guide to Daily Fantasy Football on Fanteam. As the amount of members on the platform grows and continuously increasing guaranteed prize pools can be seen in the Fanteam Tournament-Lobby, this is your chance to convert your Football expertise into real money. Whether you are a Football expert, stepping into the Fantasy Sports world, or an actual FPL player, who wants to break into the realm of Daily Fantasy Football: this is your guide to begin with!

What is Daily Fantasy Sports (DFS)?
At first, the general concept of DFS looks very simple: you choose players and receive points for their individual actions on the pitch. In the end, the team with the most points accumulated will be on top of the leaderboard and win the first price. For the Main Event on Fanteam that is around 5000€ every week! Even if you don’t finish in the top places, you will be rewarded by a good player selection, as the prize pool of 50000€ in total pays out progressively. (These are the numbers for the Premier League Main Event with a 20€ entry fee. If you wish to start slowly, you should try the 2€ tournaments, which constantly pay out a guaranteed prize pool of 7500€ per week.)

Scoring System
Before you think of any player you would like to have in your team: check the scoring system! Here you can see how many points each position receives for a specific action on the field: 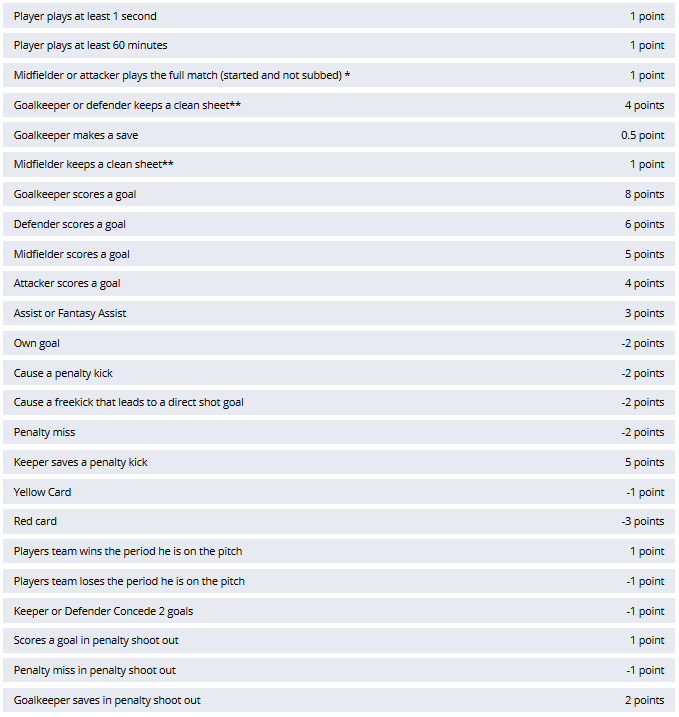 As you can see, defenders receive more points for a goal (6) than forwards do (4). As a defender will probably score less often than a forward, it can be a tournament winning pick to have a defender in your team, that scores a goal (Virgil van Dijk anyone?). The table shows, that there are position-specific points, which you have to include in your line-up creation process. Do you think that Martial is going to be substituted after the first half? That is 1 point less for him. Do you think that Kane is not going to be substituted and play the whole 90 minutes? That is already a minimum of 3 points for him.
As you can see, having the scoring system in mind while creating your team is crucial to DFS!

Getting started
If you are an ambitious FPL player, you know the first hurdle to creating your team: the huge player pool to choose your picks from. As you enter the Lobby and look for a tournament to participate in, you will see the available players that you can choose to put in your team. The list may look very chaotic at first, but if you follow some fundamental steps, you can reduce the complexity and see your team take shape.

Research
Before setting up your team, you should get a rough overview of the fixtures that you can choose players from. A good start is always looking at the bookmakers odds. Why? Before you go out there and start analysing historical team data while watching the premier league season opener from 2015, think about how the biggest betting sites on the market calculate their odds. They are doing the job for you! Let me give you two examples:

1. You are not sure about your backline for today’s fixtures? You are just one click away from calculated clean sheet probabilities. Sheffield’s odds on not receiving a goal are low? Pick Lundstram, as he is probably getting the 4 points for a clean sheet.

2. You are not sure who to pick up front next to Auba? Check the odds on over 2,5 goals. If there is a game with a high scoring probability, choose a forward playing in that match.

A good source for odds comparison is www.oddschecker.com

Of course you can extend your research and look into specific player stats. Sites like www.whoscored.com have huge databases of individual player statistics, which are freely available. But nothing is more advantageous than watching the matches and form your own judgement about the probability of individual players leaving the pitch with some nice fantasy points in the bag!

Choose a tournament
If you have a good feeling about the set-up of fixtures in a specific league, you can test your skills in football competitions from around the world. Participating in the Premier League Weekly Tournaments is one thing but what about the Italian Serie A? Or the Spanish Primera Division? Major League Soccer? Or even the Russian Premier League? Finding a niche where you can develop into an expert is a way to gain the edge over your competitors and Fanteam offers a broad selection of football leagues that are waiting to be conquered. If you are getting bored while there is an international break and no club football, just join the international qualifier games! Midweek action is guaranteed, when the best of the best players from Europe challenge each other in the Champions League. Pick your squad and get started! 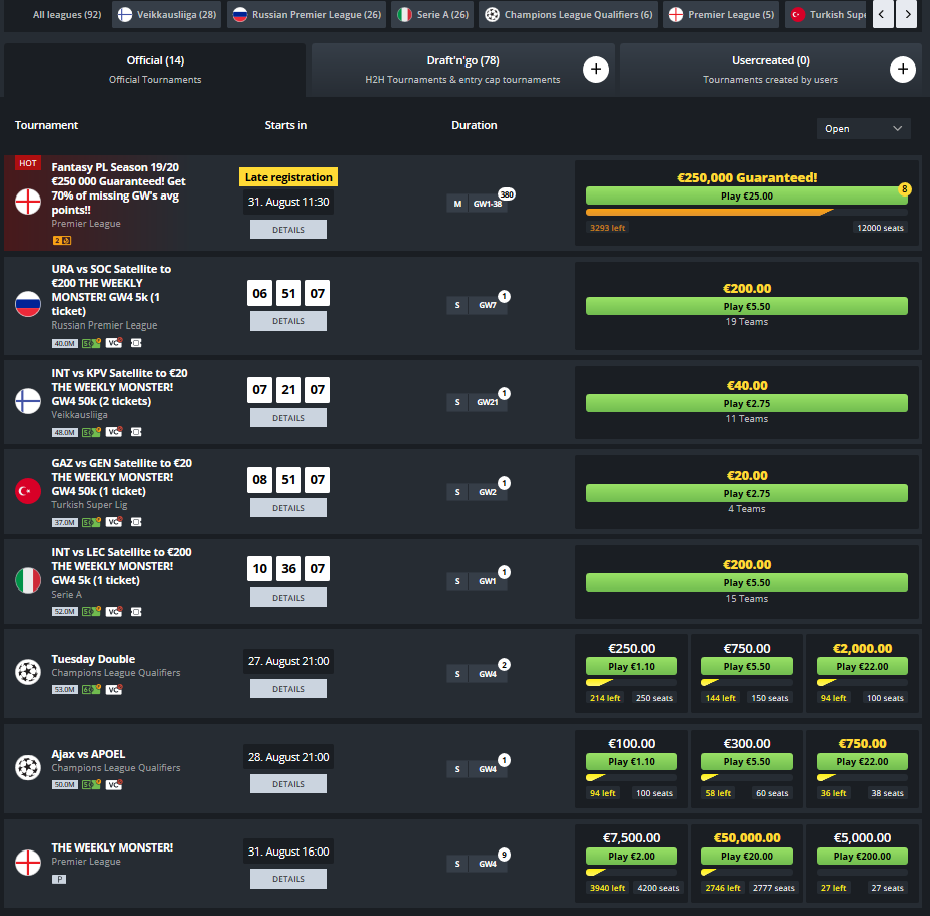 Picking your squad
After deciding which teams to focus on, the real selection process begins. As you can’t throw in all the frequently scoring players from the top clubs, because they are too expensive, you have to look for cheaper options that might bring home some points through an assist as a set piece taker or by a low priced defender that offers clean sheet points because he has an easy matchup. Here it really comes to your creativity and having a good eye on the market. Winning teams usually consist of player constellations, which have an underprized game winner, who can score in a tough matchup.

Try to balance your team and not to put too much emphasis on single zones. If you have a strong Offense and you pick the Burnley Defense, when they play away against City, you won´t stand a chance. It´s up to you to choose a formation and there are different theories out there about which formation is the best one to win a tournament. In the end, it all depends on the results of a gameweek and if you find the edge of predicting high scoring fixtures, the paid places are definitely in sight!

One other aspect that is crucial in Daily Fantasy Football is Captaincy. You choose one player to be your captain and that player receives an x2-factor to his points so his points are doubled. Some experienced players may say that Captaincy is the only variable, which divides the top places from the middle range finishes. Indeed, picking the right captain can decide about a ratio of hundreds of places in the leaderboard. But at the same time you can often see teams in the top 5 that don´t have the best scoring player of the gameweek as their captain, so you should think about that after choosing a well-balanced squad, in which all players can at least receive a specific minimum of points. Finally, you choose your captain and it´s mostly going to be one of the league´s stars having an easy matchup. Be creative, think about defenders who could score and give you a clean sheet bonus as well or go with the obvious choice. Here you can also use the bookmaker’s odds and try to find the forward with the highest probability of scoring a goal.

The squad selection process can look very difficult in the beginning. However, if you dive deeper and deeper into a specific league, watch the games and know the players, everything becomes natural. At some point, you should be able to have players and a formation in mind by just looking at the fixture list. Be an expert on a league and your research time decreases while your chances of winning increase!

Summary
– Internalize the scoring system
– Do your research and get an overview of the bookmakers odds
– Analyse individual player statistics via your preferred database
– Balance your team and play around with different formations
– Find the cheap options, which are going to bring home some points
– Choose your captain wisely and try to pick one that could score at least two times
– Look for niches on the market and specify on certain leagues.
– Watch the games to make your own judgement on the value of individual players! (Not the worst job, right?)

It’s going to be a long football season. Let’s enjoy it together and make some money!

GW4 FF247 / FanTeam €50k MONSTER COMP
As per GW2 FanTeam have very kindly gifted us 3 tickets worth €20 each to enter this weeks main competition which you can do HERE.

In order to be in the free draw, which will take place at exactly 11.59pm on Thursday (GMT) simply reply in the comments below with your FanTeam Username.

Thanks for reading Beginner’s guide to DFS Football. This article was written by FanTeam