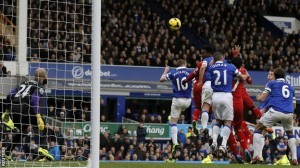 Saturday’s early kick off saw the 221st meeting in all competitions for the Merseyside club’s with Roberto Martinez looking to mastermind Everton’s 1st derby win in the Premier League since October 2010. With Daniel Sturridge on the bench for Liverpool the Reds were banking on a performance from Luis Suarez in this often volatile fixture and it took just 5 minutes for him to provide the assist for Philippe Coutinho to open the scoring. Just 3 minutes later and it was all square when Leighton Baines whipped in a free-kick and Kevin Mirallas fired past Simon Mignolet. With Everton forcing the play a needless foul on Suarez by Gareth Barry was severely punished by the Uruguayan with a rasping 25 yard scorcher. Mirallas was fortunate to stay on the pitch with what looked like a certain red card for a foul on Suarez. The 2nd half was a typical derby affair, Romelu Lukaku, who had twice been denied Mignolet, side-footed home the equaliser before converting a header from Mirallas’s corner that put the Toffees ahead with 8 minutes left. Alas in typical derby fashion, Sturridge took to the field and it the 89th minute he powered in a Steven Gerrard free-kick to leave it honours even. Leighton Baines will be a concern for Fantasy Managers as he was forced to leave the field on 50 minutes through injury. 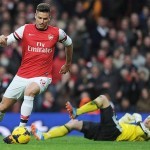 This match will not only be remembered for Olivier Giroud who bagged a goal in either half but for the comic indecision by Saints goalkeeper Artur Boruc that gifted Arsenal the opener. The Saints keeper was caught dwelling on a back-pass from Nathaniel Clyne which allowed Giroud to tap in. The Saints arrived with a clear game plan, to stifle and antagonize the home side’s midfield and it worked for much of the 1st half. Victor Wanyama went about his business whilst Santi Cazorla and Mesut Ozil looked decidedly off the pace. Jack Wilshere and Aaron Ramsey came close for the Gunners, while England new boys Adam Lallana and Jay Rodriguez were always dangerous for the visitors. Giroud sealed the win from the penalty spot after Jose Fonte was penalised for tugging Per Mertesacker’s shirt. Fantasy managers will have been buoyed by a return for Theo Walcott who came off the bench in the 70th minute.

Fulham’s troubling form continues as they lost this battle with Swansea thanks to a 70th minute winner from Jonjo Shelvey. To be honest this was the games only outstanding moment, the Swans were without Michu and his absence was clearly felt. Fulham fell behind thanks to an own goal from Aaron Hughes on the 56th minute but new Fulham captain Scott Parker scored his 1st goal for the club to draw level but this was not enough as Shelvey, introduced on the hour, made the difference with a quality strike before almost adding a 3rd late on. Fulham are in the midst of a retched run of form which manager Martin Jol needs to address as the Fulham faithful are beginning to grow restless.

With Tony Pulis, the new Palace Manager, watching from the terraces there was more good news for relegation threatened Palace after this hard fought win against a much fancied Hull City side. Caretaker boss Keith Millen, who will hand over the reins to Pulis, signed off with a victory that was secured when Barry Bannan scored from a Cameron Jerome pass in the 81st minute. Palace were down to 10 men after Yannick Bolasie was harshly dismissed for a lunge at Jake Livermore and they were almost pegged back in the final seconds when Livermore saw his effort bundled off the line and Liam Rosenior hit the post from 25 yards. 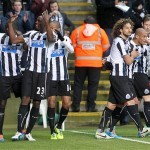 Newcastle secured a 3rd straight Premier League win to strengthen their league position but were made to work for it against Norwich. Defensively, Newcastle were poor throughout, but goals from Loic Remy and Yoan Gouffran in the 1st half were enough to claim all 3 points despite Leroy Fer’s header for the visitors in the 80th minutes. Loic Remy opened the scoring in the 2nd minute of the game when he headed in a Yohan Cabaye corner; it was Newcastle’s 1st goal from a corner-kick since October 2011. Shola Ameobi was in fine form and was instrumental in Newcastle’s 2nd goal when he left Bradley Johnson floundering with a dazzling run inside his own half, threaded a pass out to Remy and then rose to meet a Sissoko cross which was saved by John Ruddy but Gouffran tapped in from point blank range. Norwich, to there credit continued to fight and were rewarded when Leroy Fer planted a header beyond Tim Krul from a corner. It set up a frantic finale, but Newcastle held on. Anthony Pilkington is an injury concern for the Canaries having left the game on 48 minutes with a serious hamstring injury.

Stoke recorded their 1st win in 9 as goals from Charlie Adam and Steven Nzonzi steered them to a 2-0 home victory against Sunderland, who had Wes Brown sent off in very controversial circumstances. The Potters took the lead on the half-hour mark when Adam drilled in from an Nzonzi pass. The controversial sending off occurred 6 minutes later when referee Kevin Friend deemed a sliding tackle from Brown on Adam that won the ball was worthy of a straight red card. Sunderland continued to battle bravely but Stoke’s win was sealed in the 81st minute when Nzonzi slotted home having been set up nicely by Peter Crouch. 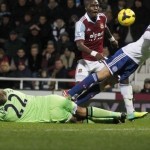 The Saturday evening match saw East meet West London in an entertaining and card free battle at Upton Park as Chelsea overcame West Ham thanks to 2 goals from Frank Lampard and 1 from Oscar. Lampard put the Blues ahead from the penalty spot after Guy Demel’s poor back-pass allowed Oscar to nip in, and he was brought down by Jussi Jaaskelainen. Oscar brilliantly made it 2-0 when he drilled the ball home from the edge of the area following a fantastic solo run. West Ham were much improved after the break and Modibo Maiga went close, but Lampard sealed the win with a confident finish following good work from Eden Hazard. The result takes Chelsea to 3rd place in the Premier League 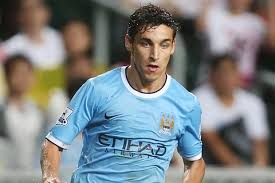 Manchester City might have their troubles when on the road, however when they play at the Etihad, they certainly turn it on. The Spurs defence has been very tight of late and so no one would have predicted the massacre that was to occur. After only 14 seconds City had their first as Jesus Navas started the rot and it was all downhill from then on for Spurs. Alvaro Negredo got involved in the action as he got City’s second and then Sergio Aguero got the goal he deserved to make it 3 after converting a pass from Navas. A neat interchange between Negredo and Yaya Toure allowed the powerful Ivorian to power his way through the Spurs defence and his pass across goal gave Aguero his second of the game and justified all fantasy managers that captained the prolific striker. Negredo then showed his class again as he made a fool of Michael Dawson. A clever ball through the middle of the park from Fernandinho was directed at Negredo who collected and spun past Dawson and cooly finished past Lloris. There was still time for another as the man who started everything then finished it off. A long pass from James Milner was misjudged by Jan Vertonghen which then allowed Navas through on goal and he neatly nestled the ball in the back of the net as Spurs suffered a humiliating defeat. To be fair, not many would have been able to handle Navas, Aguero and company but the Spurs defence was also very poor. 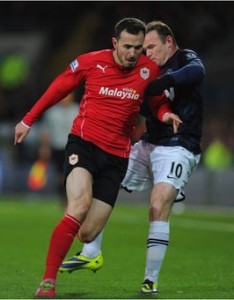 On the face of it this was a fantastic opportunity for United to carry on from their victory over the league leaders Arsenal last time out, but in the end this would seem more like a victory for Cardiff and 2 more points dropped for United. Wayne Rooney carried on with his impressive form after he opened the scoring for United with Javier Hernandez providing the assist. This may well have left Cardiff fans with a sour taste in their mouth though as Rooney was a touch lucky that he wasn’t already back in the dressing room for an early shower. After kicking Jordon Mutch off the ball, he was fortunate to escape with only a yellow card. It was Mutch who provided the assist for Fraizer Campbell to equalise for Cardiff but just short of half-time a Rooney cross was headed in superbly by Patrice Evra to give United a vital lead at half time. The drama was not to end there though as Cardiff carried on fighting valiantly and were rewarded deep into injury time. A free kick from Pete Whittingham was turned in by Kim Bo-Kyung to send the Cardiff fans crazy and bring despair to David Moyes’s side. 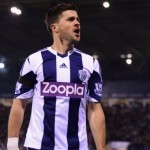 Monday night football was back and there was added spice to this game as Albion hosted Villa at the Hawthorns for the West Midlands derby. Prior to the game Villa boss Paul Lambert stated that Villa is the bigger team of these 2 sides, however they did not start that way. It began as the Shane Long show as the striker notched 2 beautiful goals, the 1st controlling a long ball from Chris Brunt and placing the ball past Guzan into the corner of the net. The 2nd was a tad more fortunate as a loose back pass from Bacuna found Long, however it still required a good finish and Long did not disappoint as he chipped the ball neatly into the Villa goal. West Brom went into the break with the lead and when the teams returned it was Villa who gave themselves a chance in the game as El Ahmadi produced a neat finish, Andreas Weimann who had come on as a substitute provided the assist. 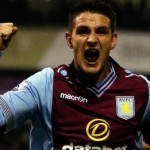 Then with 15 odd minutes left Villa produced the equaliser and it was Ashley Westwood scoring his debut goal for Villa after he controlled a headed clearance outside of the box and crashed his effort into the corner, it was quite a way to open his account for Villa. So yet again the West Midlands derby finished in a draw and it must be said that Monday night football did not disappoint as we were treated to 4 quality goals.