Welcome to the FF247 Fantasy Football Site Team GW15. Hmmm, we don’t quite know what to make of that past week. 9 of our 11 posted some sort of return, albeit a modest one. Patricio and Richarlison aside every other player scored 5 or above, which is usually a good sign. The problem was that only one of those actually broke the six point barrier and that was Doherty… with 7. We didn’t even get to see our captain play as Kun took the day off, as did our vice-captain Salah, in an ironically different fashion. All in all then we landed on 55 points which was 6 above the average but still meant a minor red arrow for us as we fell 2k in the overall rankings to 60,606th. Last weeks transfer of Sane in for Lucas Moura was looking promising until FPL Towers deemed his ‘first assist’ not to be one, despite all evidence to the contrary. His shot was downgraded to a ‘cross/pass’. Pass. Idiots.

Anyhow, onwards and upwards, two weeks ago we promised you a Hazard transfer and ultimately decided against it. Last week we promised you a Kane transfer…. Let’s go see how close we came to keeping our word this time! 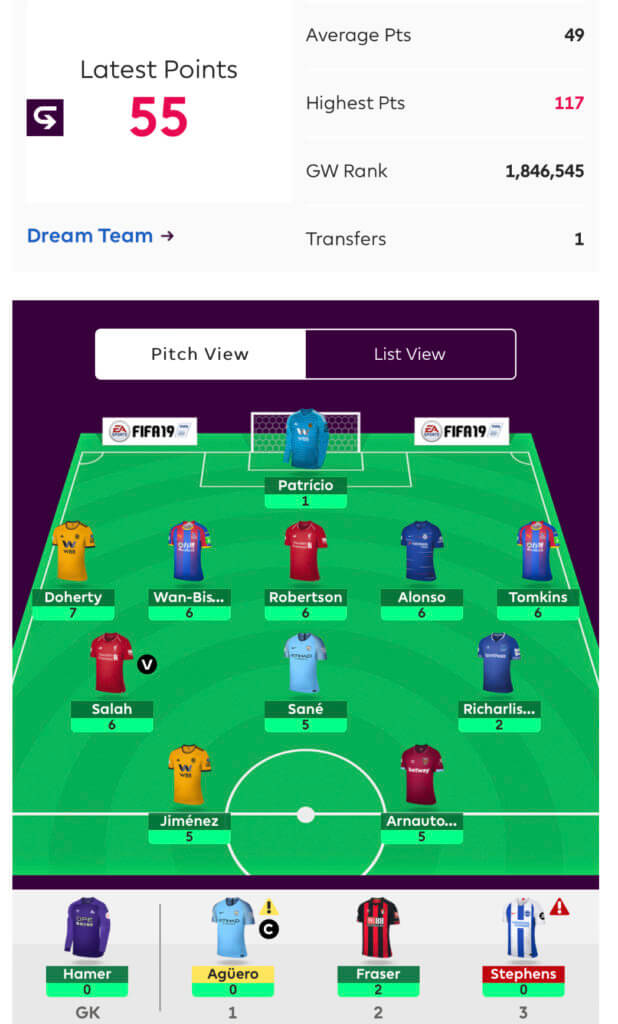 This weeks transfer decision(s)
For once we are actually going to push through and do what we said we would. No drama or excitement this week, a simple vote with a clear outcome sees Kane come in for Aguero. For what it’s worth Aubameyang did garner one vote as an alternative but the majority felt that Kane at home against Southampton was too good an opportunity to pass up, although we’ve all been here before with Kane in the recent past haven’t we?! The decision itself was dealt a small blow this morning once it was announced that Saints are now sans the ball and chain that is Mark Hughes.

We detailed our Kun to Kane justification last week and that all still stands so we won’t repeat ourselves. Well ok, we will, literally – “It’s long been told that Spurs’ fixtures turn for the better come GW15 and this does indeed seem to be the case with Southampton (H), Leicester (A) and Burnley (H) as their next 3 after this weekend as well as then facing Bournemouth and Wolves at home and Cardiff away over the Christmas period. But how on earth can we afford a 2nd premium striker without killing half of our midfield and 2 of our defenders? Truth is we probably can’t and so we need a sacrificial lamb and that comes in the shape of Aguero for us (*gulp). When we delve into his fixtures versus the Kane ones above we see that he has Watford and Chelsea away after this week followed by a potentially challenging Everton tie, albeit at home. Kun has been a bit ‘meh’ away from home whereas we can see Kane being captaincy material in a good few of his games”. Plus he’s potentially injured. Farewell for a bit Sergio…

To confirm then we have… SOLD: AGUERO & BOUGHT: KANE

Our Captain is Harry Kane
Little surprise here then with the strength of fixture and Kane has returned in his last four games now, and none of them were quite as ‘easy’ as Southampton at home. Fool me once and all that…

Salah gets our Vice band if the unthinkable happens and Kane is rested. 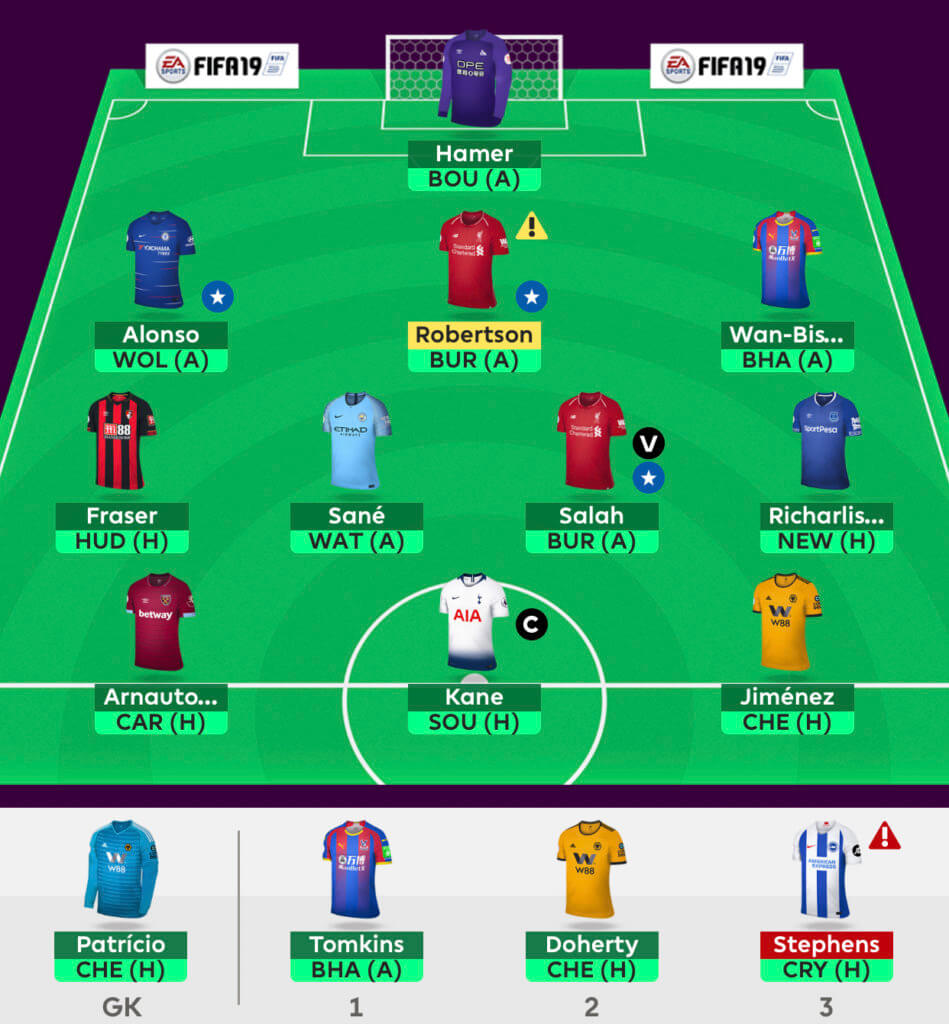 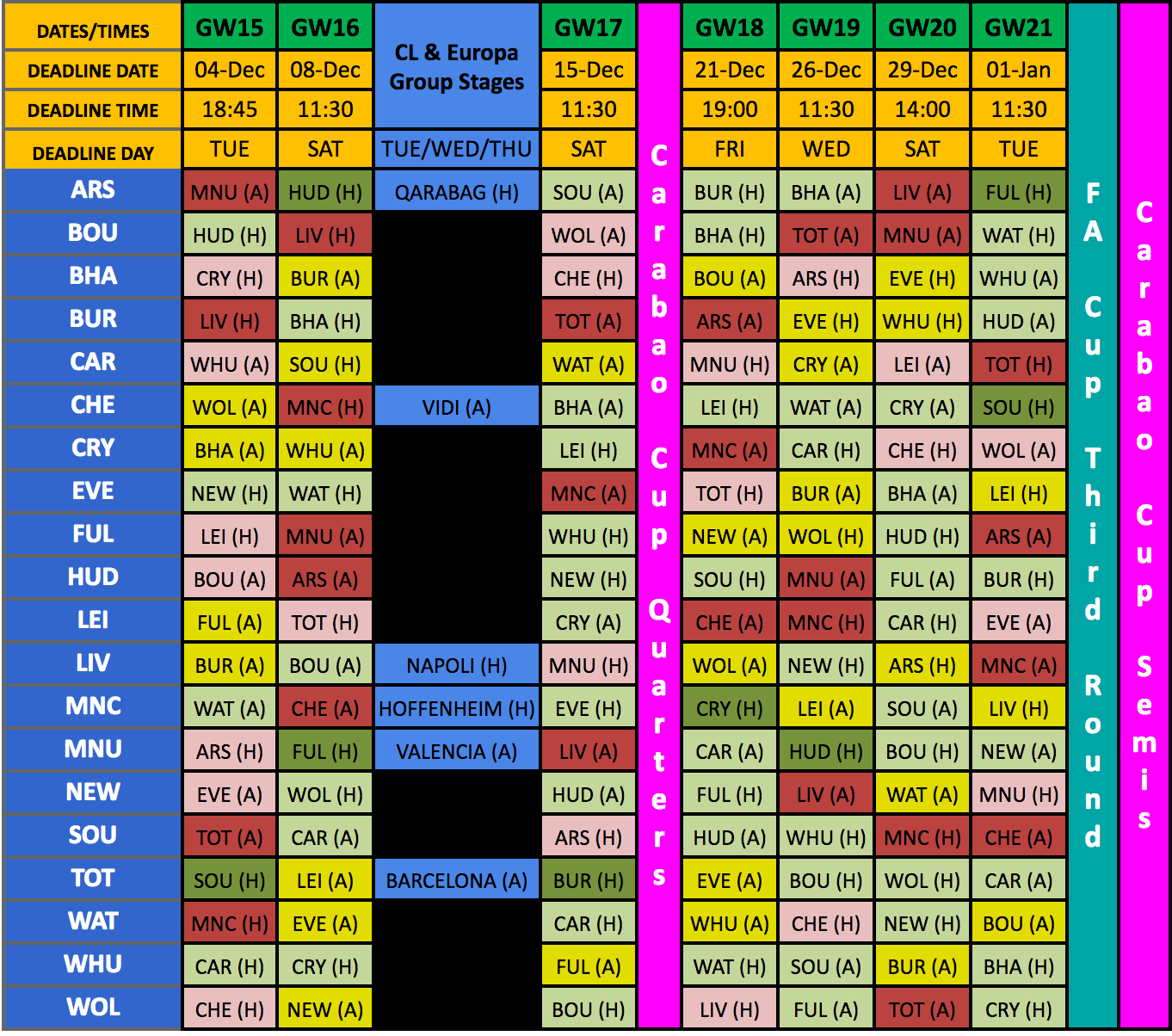