Welcome to Football Captain Picks Gameweek 38. It’s here: the final Gameweek of the season. How abrupt it seems. Perhaps that’s a relief? Either way, though, there’s an ominously bittersweet feeling in the metaphorical air. If you view yourself as a relatively casual FPL player, hopefully the literal air around you has a summery breeze carrying it, with the scent of freshly mown lawn and a BBQ lagging just behind; if you view yourself as an FPL obsessive, however, then chances are that you’re surrounded by stagnant air whilst frantically checking if Son’s price fell at ~01:20 during the decisive CL matches. ‘Woe betide those who took the risk to sell him before seeing how many new injuries crop up in the semi-finals’, you muse to yourself, before realising that Sterling’s now just out of reach. Having the summer off’s probably for the best…

The phrase “already on the beach” is often chucked around as each PL season draws towards its conclusion in a tame fashion — many teams, whether they’ve been condemned to relegation for weeks already or simply meandered within the mid-table positions, are deemed to have nothing left worth playing for — it’s a valid concern to raise. Without incentive, without drive, where do the points come from? Fear not. The following 5 candidates (the first 4 if honesty matters around here) arguably have better reasons to shine now than they’ve had all season. With crucial mini-leagues in mind, hopefully the same can be said for your FPL team over this final hurdle, unless you’re miles ahead. Top stuff (quite literally) if so. 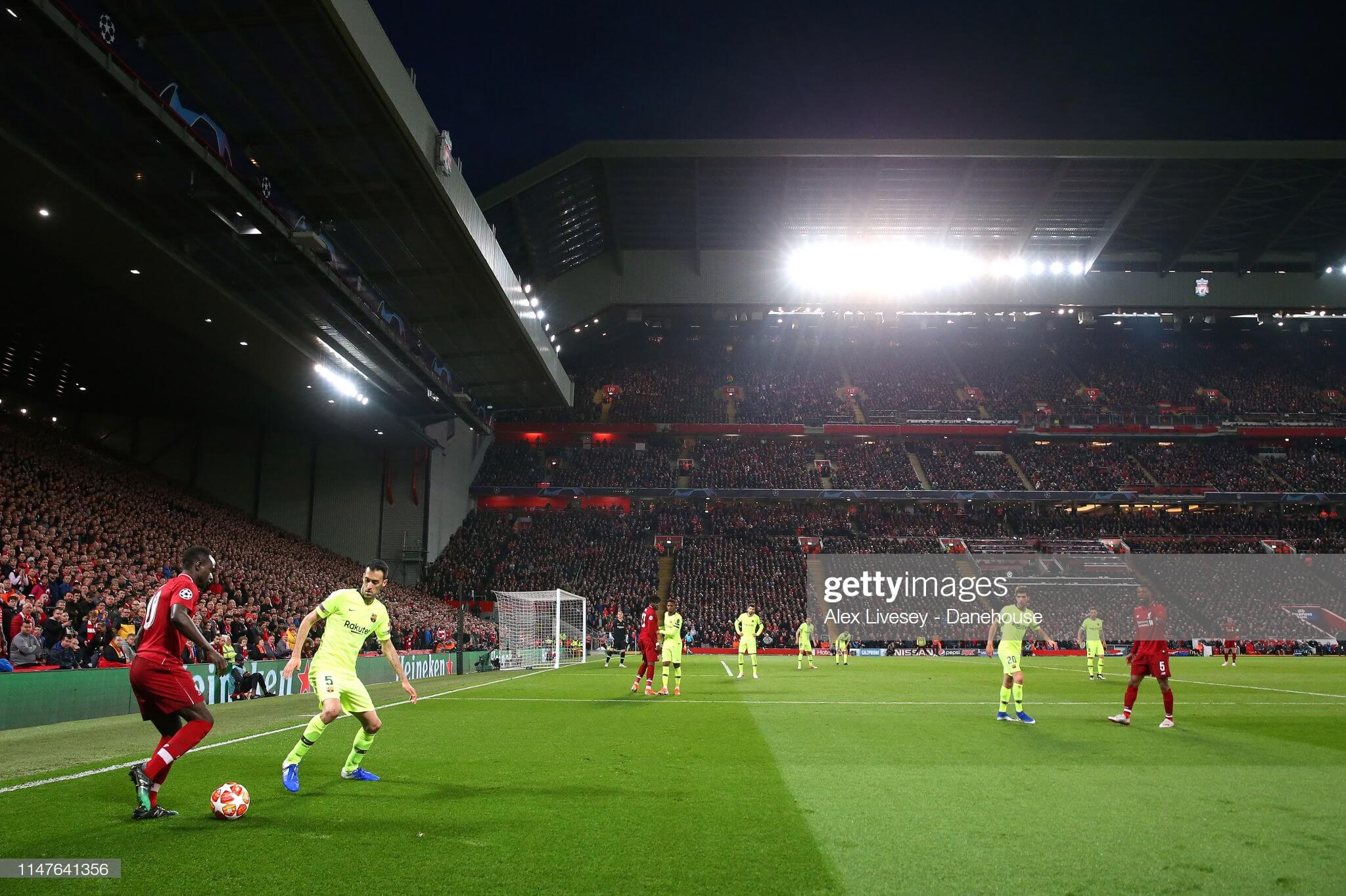 Just a quick reminder: one team’s going to finish on 94+ points and still, remarkably, not win the PL title. It all means that Liverpool need to beat Wolves to give themselves the mere possibility that it won’t be their unwanted fate. This would be like finishing 2nd with Riley Reid: it’d be beyond impressive, almost unbelievable, despite resulting in absolutely nothing but a desire for more games and some potentially incurable pain. Sadio will probably have bigger things on his mind come Sunday afternoon. Indeed, if he were moping around on a beach already, it’d be swarming with Japanese spider crabs as the tide brings a storm in. No sandcastles to be seen here.

As for Mané, promisingly, 16 of his impressive 20 goals in the PL have been scored at home. Hypothetically, if Liverpool win 4-0 on Sunday afternoon, then you’d have to think that Mané will grab himself at least an assist. Especially if he’s the lone member of the first-choice deadly trio who starts here. Surely? It’s almost guaranteed if Divock and Xherdan play alongside him. Salah — if he’s got his head screwed back on — is always a strong alternative; “NEVER GIVE UP” on a player’s fitness until a press conference rules them out of action. Wolves love tackling top-6 teams, admittedly, but playing at Anfield’s a different matter. You can just ask Luis Suárez about how Liverpool can dig their teeth in when it matters most.

Raheem Sterling vs Brighton (A) 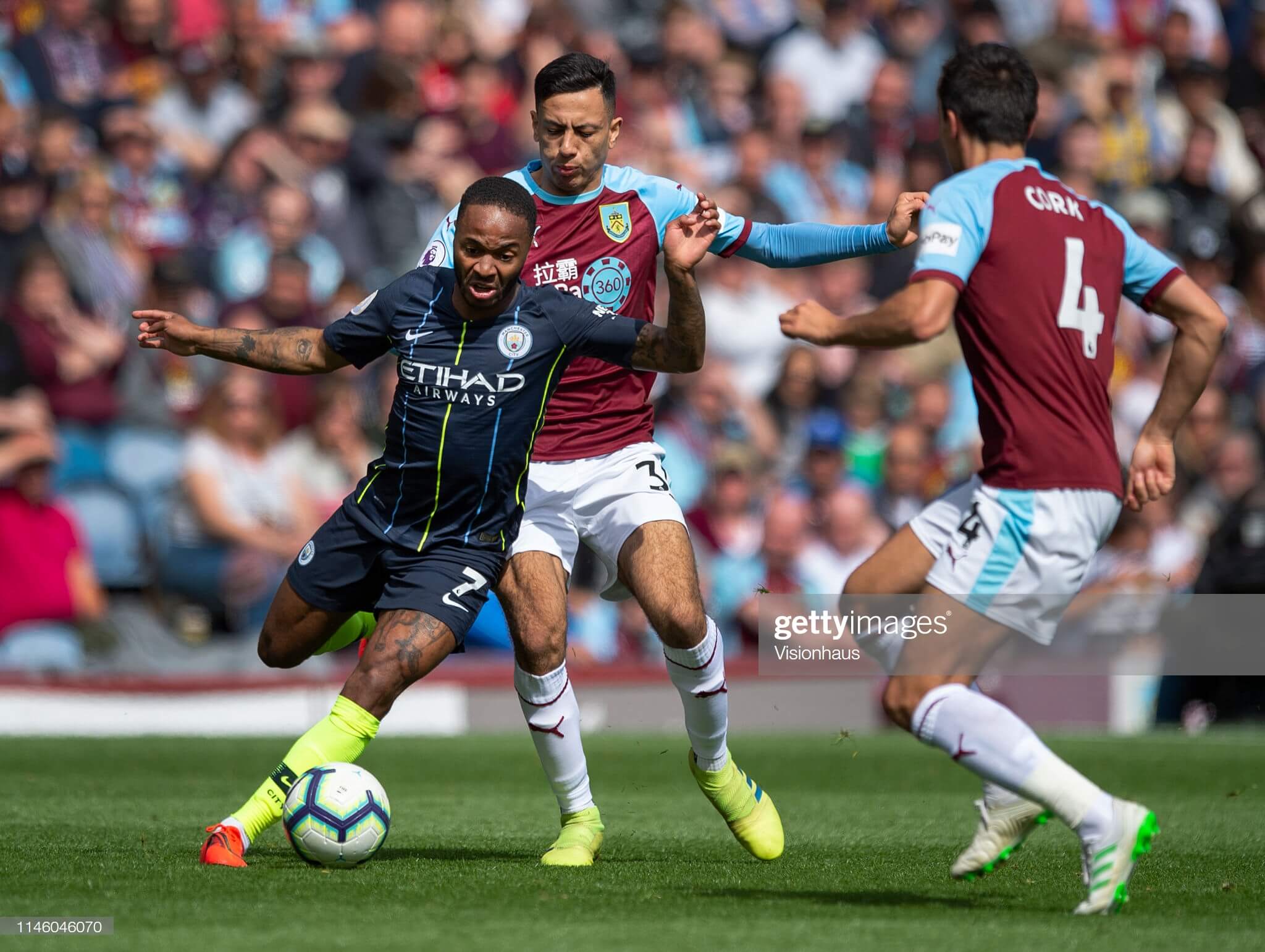 Moving on quickly from Liverpool, just as this man did, Sterling can win it all soon. Is that a necessarily promising sign? Just ask Philippe Coutinho this time! Nonetheless, just one win away from retaining the PL title now, a Raheem Sterling away-day masterclass would probably push Man City over the finish line. It’s a gut feeling with a solid foundation. Double-digit hauls whilst away from home vs West Ham, Huddersfield and Crystal Palace, not forgetting his healthy return of 14 points in the reverse fixture, bodes well; Brighton can’t defend against Arsenal every weekend, unfortunately for any Duffy loyalists.

In reference to my GW5 article from the 2016/17 season — Liverpool’s antics really have rubbed off on me to drop such a historical reference — Pep told Sterling that “as long as you work for me, I’ll fight for you” over a text before that season started, and those words ring even louder now than they did after Raheem’s painfully short-lived Euro campaign. The wisest will probably brace themselves for a rewarding performance. 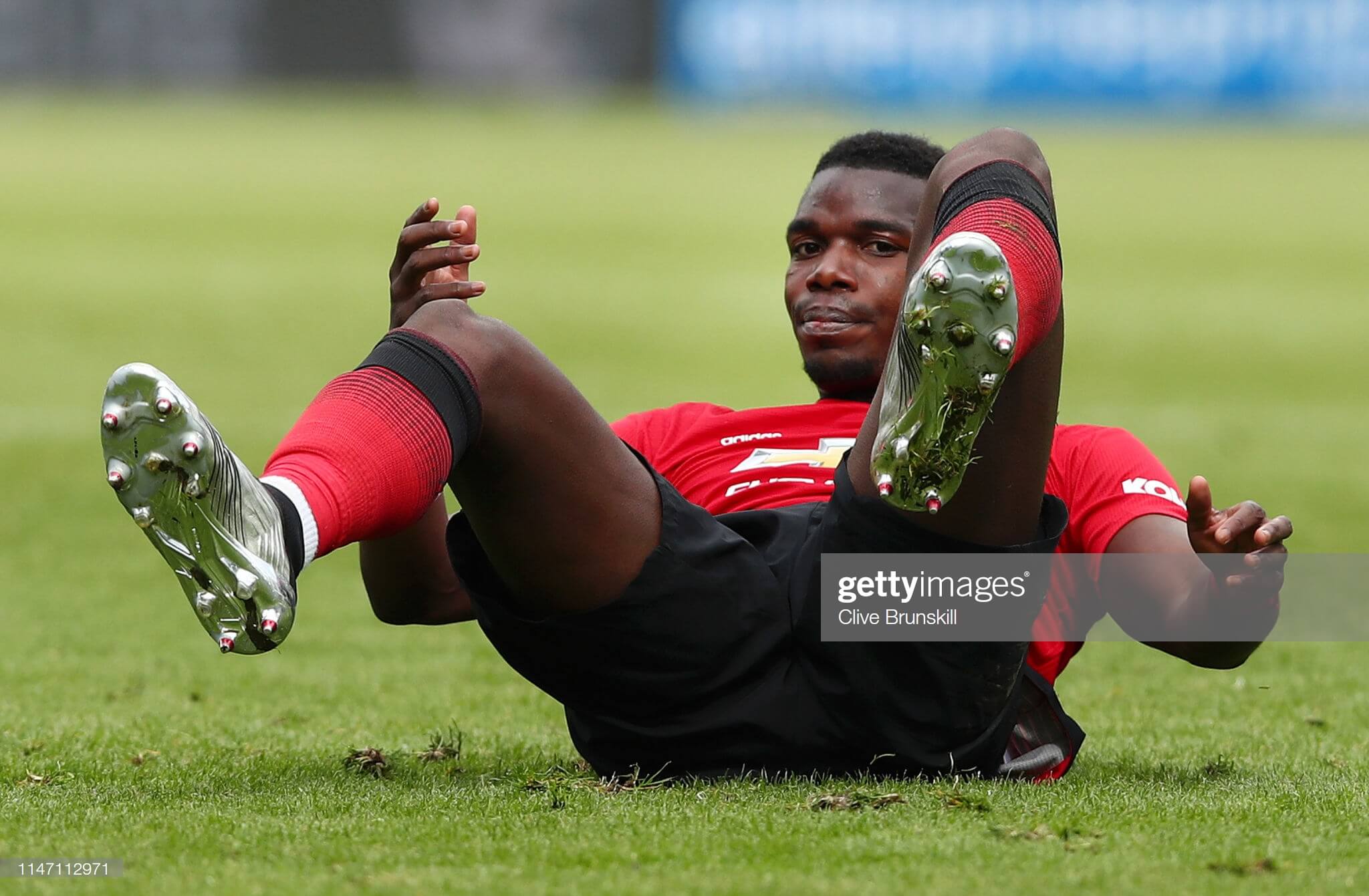 That’s it. Clearly, teams with something to play for aren’t in abundance, given how the top-4 race has pathetically fizzled out.

Except, on a purely egocentric level, Pogba surely has his own motives. Just as he had something to prove when José left, the doubters are back, many of whom will be reluctantly watching at Old Trafford for what could be his final match there. Cardiff’s confirmed relegation — a fate that’s largely due to conceding 69 goals — shouldn’t be neglected here. Paul would’ve likely been very popular if either of his pair of crossbar strikes had found its way in against Huddersfield last Sunday and, of course, penalty duty often redeems his mediocrity. Etheridge can’t save yet another one… can he? Scott might be the better pick for a 2-pointer after all.

Callum Wilson vs Crystal Palace (A) 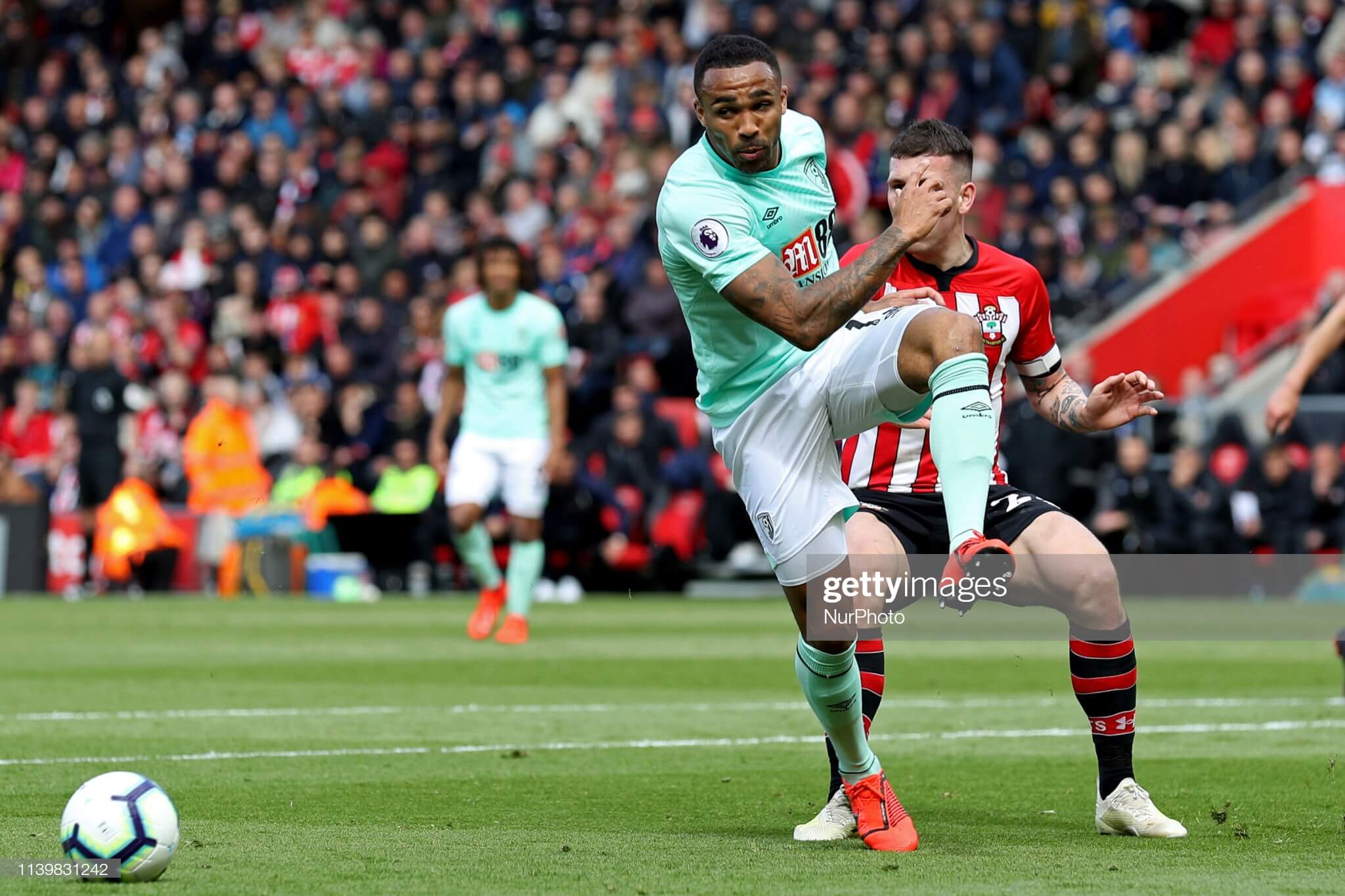 Here’s the perfect storm. The storm that’s on the beach, you say? Not quite. Wilson’s place with the England squad remains open, with one final match to prove himself and add to the staggering 26 goal involvements that he’s had in the PL alone. Since returning from injury, Callum’s now played in 4 away matches, most recently scoring {11, 2, 15, 16} points. To bolster this incredibly promising form, Crystal Palace perform far better when they’re playing away from home, which must bring tears of pride to Terry’s eye. Selhurst Park has witnessed terrible things; 19th in the table for total PL home points encapsulates the tale.

An easy mini-league-snatching risk’s on offer. This was actually spotted by the casuals too: the pre-Son-red transfer trends indicated that ‘Jiménez to Wilson’ was an early-bird-fool preference. There was Darren, smugly sitting in his kitchen, circulating screenshots of his GW38 team around to his workplace’s mini-league rivals whilst blaring out Football Focus for some background noise.

He’ll most likely be taking an 8-point hit now.

If you’re chasing, though, then it might be worth matching Dazza with this one. 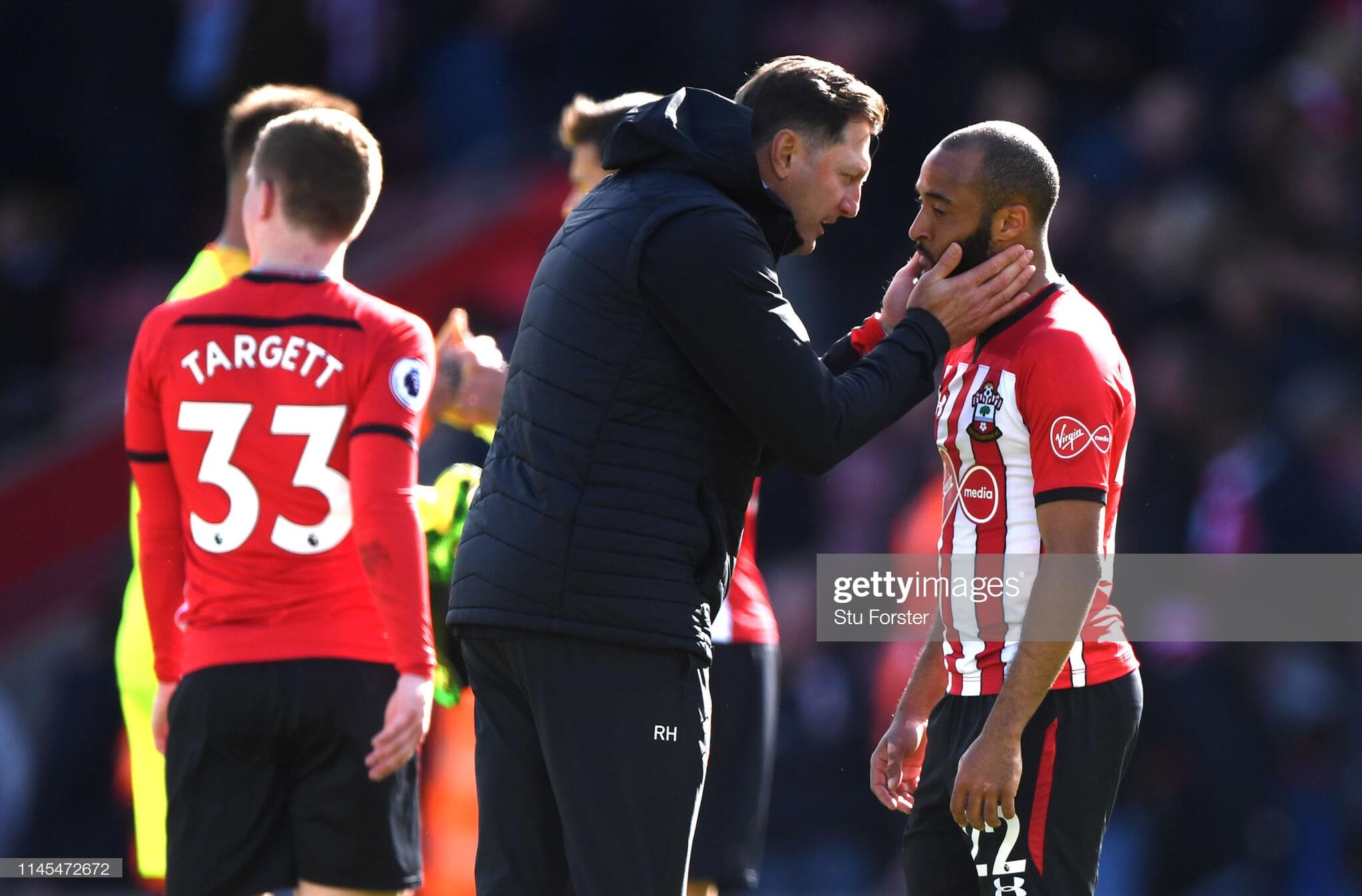 Last stop: Desperation Town. Whatever scrap Saints assets you happen to have, no matter how much they’ve continually disappointed you since the DGWs, forgive them for their pathetic 1-pointers. They could be the last-gasp captaincy gamble that’s required to breathe life back into hopeless mini-leagues. Operative word: “could” be.

If an inevitable whimper was expected from the Huddersfield lads last weekend, one might’ve forgotten just how abject Man United have become, but it’ll surely be silenced by Hasenhüttl’s men. Nathan Redmond, JWP and Shane Long, a selection of potential FPL saviours for your very own. Choose wisely.

Good luck! Don’t rue this final captaincy decision over the long summer ahead… just enjoy those BBQs instead.

Thanks for reading Fantasy Football Captain Picks Gameweek 38. This article was written by James. 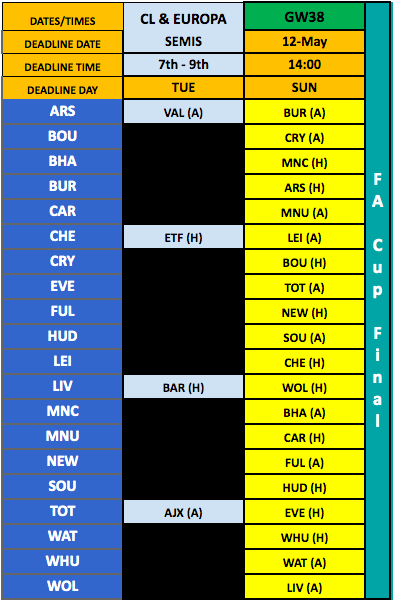