Whether you’ve been waiting with baited breath for our return, or you’ve simply stumbled across this by accident, let us give you a brief history of what we’ve done before, who we actually are, what we do and what to expect from this series of articles.

Nothing magnificent but also nothing too shoddy. 2017/18 aside perhaps, not quite sure what went so drastically wrong that time!

‘Who the f*&^$£ng hell are you…’
We’ve broke out into a series of well known football chants, just in case you hadn’t already noticed, or if not simply wondered what on earth was going on!

To answer the question itself the FF247 team is managed by a committee of Cookie, Floydeth, Init, Kop and Mito. Between them they have exactly 49 years experience of playing FPL. They have 36 x top 100k ranks, 9 x top 10k ranks and 3 top 1k ranks. With a couple of 500 ranks in that mix. Again then, nothing overly magnificent but also nothing too shoddy. Bloody well consistent then actually, if nothing else.

To add to that mix of experience though they also play other fantasy games and in there we have a fantasy player who is generally considered (and revered) as one of the best MLS fantasy players ever (highest finish is 2nd… don’t ask), someone who finished 5th in a World Cup comp and won Harry Kane’s wife (or something similar, we recall), a couple of cricket experts who don’t count cricket as their first language and a few Tour de France aficionados. They play and understand fantasy games is what we are trying to say….

We do what we want, we are FF247, we do what we want…
We play our own game but we play to win. We won’t go taking unnecessary risks or punts just to please the gallery. You’ll find that each and every transfer or decision is well thought out, researched and reasoned. It can make it seem predictable and sometimes boring but we try to liven that up with tales of how we got there.

Great expectations?
We have no illusions of grandeur, we know what we do will most likely result in a reasonably good score / rank come the end. To go the extra mile would take some quirk of fortune to smile on us, massively.

GW1 Thinking…
We joked in the previous article’s comments that we were simply sat waiting / watching / taking screenshots of the best teams and that we would pick one of those. The reality is that we have started from scratch and created our own. What follows is the rough rationale from that convo as to how we landed on each position;

We’ve taken the cheap & nasty route on our keepers to start the season. Nasty might be doing them an injustice, but we know absolutely nothing about Will Norris so he could in fact be nasty. To prove what a big club (site team) we are, we sent our second choice keeper out on loan to League One already, do us proud Will, do us proud. Why Pope? That’s a fair question. And we’ll give you an honest answer. When we started filling out our team somebody put Pope in and nobody questioned it! Our research knows no bounds. In fairness to Pope he had a standout season in 2017/18 and if both he and Burnley can replicate that form he’ll be great value at £4.5m.

Double Liverpool picks itself. The only question was whether to go for Robbo or TAA and this was something we agonised over (seriously!). Graphs were prepared, YouTube footage was used, we even rang Klopp but unfortunately his number was engaged. In the end we flipped a coin and went with Robbo.

There was no argument surrounding the inclusion of Lucas Digne. We’re well aware that Everton have lost both Zouma & Gueye, but they appear to have recruited wisely so their defence may not be as badly affected as some are predicting. His attacking threat is nearly on a par with Liverpool’s full-backs.

Kyle Walker-Peters is someone we’re unsure about. It remains to be seen whether he or Serge Aurier is deemed to be 1st choice right-back. We are however confident that he will start GW1 and we can reassess the situation in a couple of weeks. A number of the management team were not initially happy with the inclusion of KWP. Eventually one relented and claimed he “could live with KWP”, to which another replied, “I prefer my wife”. Professional to the end.

Lundstram is a £4.0m filler who may or may not play. The same can be said for a number of £4.0m defenders.

Leicester don’t have the easiest of fixtures to start the season but at £6.5m Perez potentially represents great value for money. He picked up 12 goals and two assists last season in an average Newcastle side and we’re confident he can improve on that now that he’s surrounded by better players.

Somebody was clearly drunk when Ceballos made it into our squad. However, we’ve come to our senses. Sort of! Any midfielder at £5.5m is going to be something of a punt. So we’ve taken a punt on Aston Villa’s John McGinn. He scored seven and picked up nine assists in the Championship last season and hopefully he can bring some of those attacking returns to the PL.

Dendoncker is in because we needed a £4.5m midfielder and he currently appears to be the best option.

We thought our team was finalised until someone piped up with “we’re going to want Kane in GW3”. Great. The way our squad had been structured getting Kane in GW3 may have been tricky and so it was decided we’d have Kane from the beginning. We know it’s August but that hoodoo was banished last season and with new boys Villa at home this weekend we’re banking on Harry having his best ever start to the season. After all, he’s world class!! (Ed (Cookie) NO HE IS
NOT!!)

After all of that we’ve given King the boot for Diogo Jota. We’re well aware that Bournemouth have a couple of great fixtures to start with but Wolves are already up and running, and Jota has been in decent form. This is certainly form over fixtures.

With Romelu Lukaku set to join Inter Milan, United are not left with many options to play up front. Therefore we’ve went with Mason Greenwood as our ultra-cheap 3rd forward. He has impressed during preseason and with those lack of options he’s bound to get some minutes, hopefully. 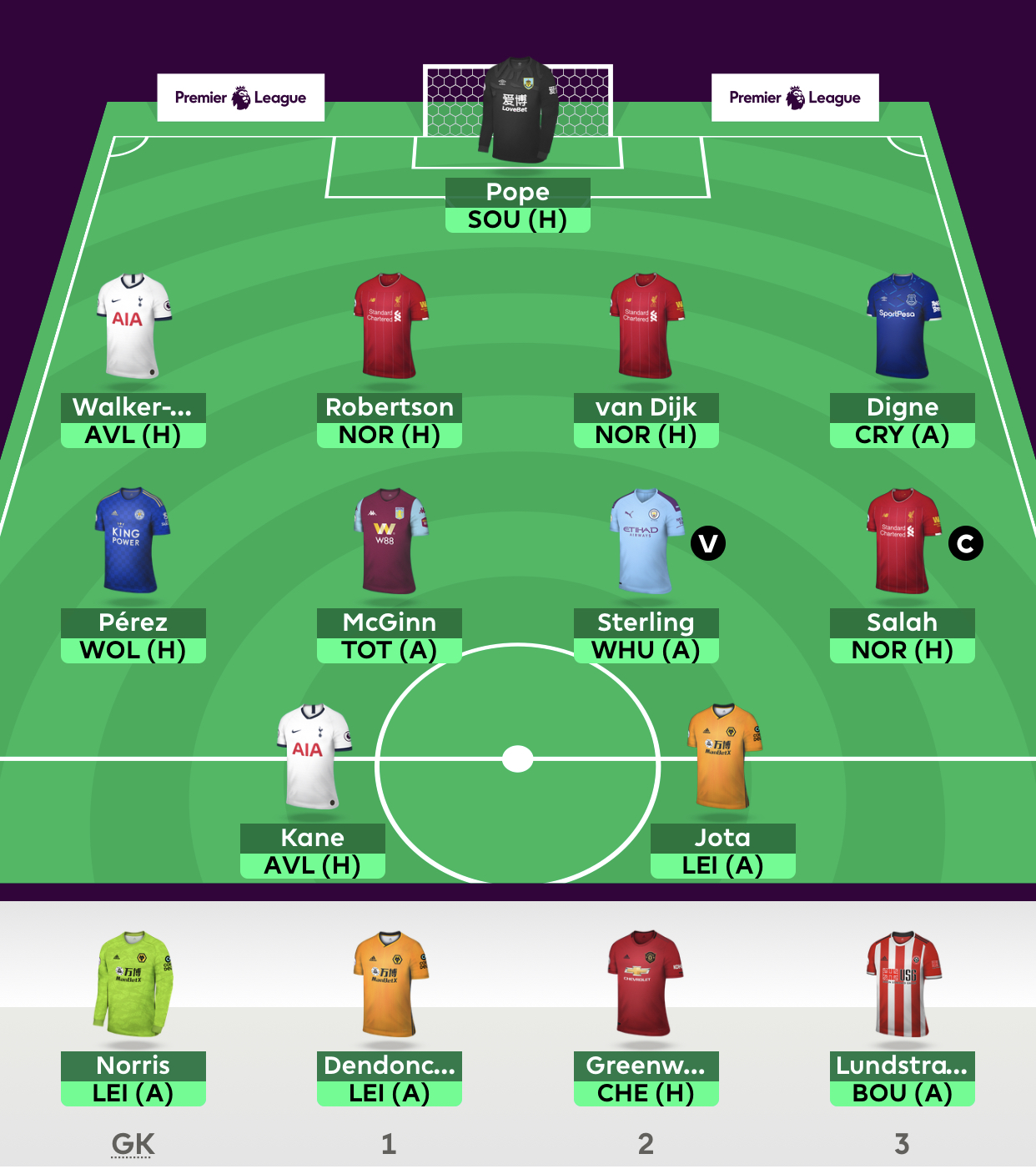 Salah picked up three votes to Sterling’s one. Only four votes were cast. just after the vote was made, the following comment was made “I hate an early captain, site team’s season could be ruined by the end of Friday”. It should be pointed out that this comment was made by the committee member who gave Salah the 3rd vote and handed him the armband for the weekend!!