Writing this so early may yet prove to be folly, and no doubt the second it is published the PL will announce a circuit breaker and B(lank)GW18 will become B(leak)GW18 and we shall be back into the territory of adding ‘+’ symbols to GW’s again. But just in case we somehow avoid the above doomsday scenario we have decided to break the upcoming week’s down into words. You could always just look at the Fixture Tracker but sometimes it also helps to have the lay of the land spelt out in simple terms.*

*On the above, and to confirm what BoJo said on Monday evening, as far as he is concerned he is happy for it to continue. But that does of course depend on Covid cases within clubs not escalating and the players behaving responsibly.** 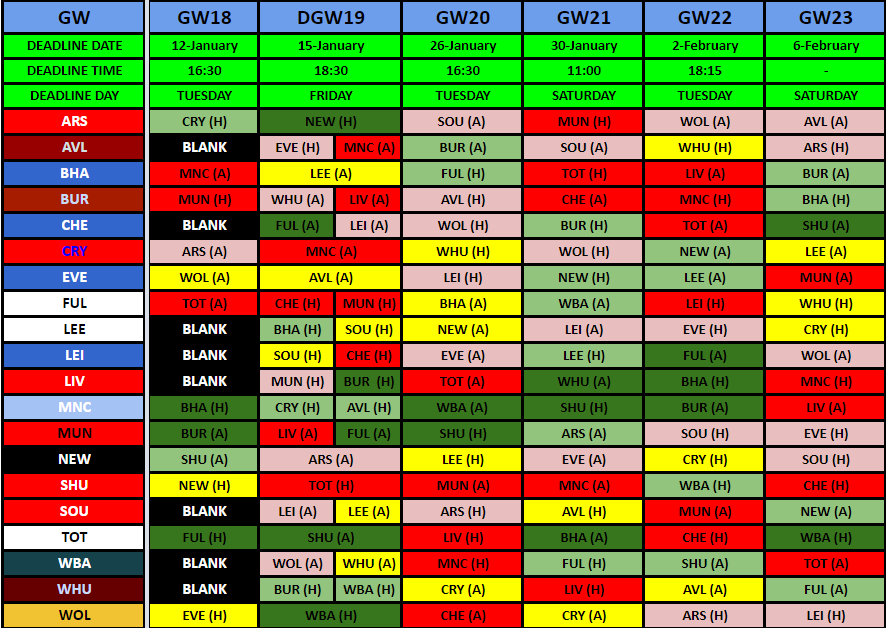 FIXTURE TRACKER LINK
For those who would like to make their own copy to play with;

Observations on GW’s 18 to 23
We thought we would begin with a quick overview of what lies ahead, as a few obvious things jump out here;

GW Proximity
The first thing which strikes us (other than the obvious blank and double) is that the fixtures pile up pretty quickly after GW18;

That’s potentially 7 league games in less than 4 weeks for some teams. Not to mention some FA Cup games and Milk Cup semis too. And you thought rotation at Christmas was bad…

A list of teams
In essence the following is just that. We did say we would keep this simple though! But if you look more closely you will see that it is a list of teams split by how they transverse both BGW18 & DGW19. And hopefully it may be one to refer back to in the next week or so as it splits them all down into who has what over the ‘rather difficult to naviagate’ BGW18 & DGW19.

Teams with 3 games over both
The following play in 18 and then back that up with a double in 19;

Teams with a game in both (i.e no blank or double)

Blank GW18 Fixture Strategy
The above list(s) should give you a bit of a guide as to whether or not you need to ship or buy a player. And it is very objective. If we are to jump to the exact opposite for a moment then here is quick subjective guide to 18:

Originally it looked very difficult to play both 18 & 19 without using some sort of a Chip. Since the PL added a few loose fixtures to both 18 & 19 it now looks a tad easier, albeit not ideal.

We have had a fair few questions on site in relation to the ‘minimum’ number of players one would dare approach BGW18 with. The consensus seems to be that 7 would be borderline, 8-9 would be more ideal and anything in excess of that would be perfect.

Our answer would be that it depends on your team and who that 7/8/9 actually are. If they are all good players with decent fixtures then crack on. Just bear in mind that most us carry 3, 4 or even 5 players who get us a point or two every week, and we play them knowing they will do just that. Your BGW18 strategy may simply come down to what balance of those you have in relation to the aforementioned point scorers.

Double GW19 Strategy
As we see it you have multiple plays here. If you can build a 15 man squad that you are happy with then a Bench Boost may be in order.

If you have a weak bench then perhaps deploying a Triple Captain could be the way to go, but just bear in mind rotation is very likely.

The alternative is to do neither and wait on future DGW’s, the likelihood of which grows with every Covid postponement.

Free Hit Strategy
If you find yourself with less than desirable numbers / the wrong players in BGW18 or simply fancy chasing DGW19 with similarly more suitable assets then playing the Free Hit could be the ideal solution. It may sound simple but here are the basics once more, just in case you are confused on any aspects of it;

Postponments
A quick final word on postponments. If, unlikely as it seems, ALL games in a GW are cancelled then any Chips, Wildcards or transfers made will be lost forever. And any hits taken will still be counted. All of which means it may be wise to delay pressing that confirm button on anything until the last possible moment. But obviously don’t forget to actually press it at some point!!!

All of which may leave you simply repeating the title of the article, but I thought it was worth going over again.

Thanks for reading FPL Fixtures Gameweek 18. This article was written by Inittowinit.