Looking at Norwich as Fantasy Prospects for the New Season

Norwich City’s promotion to the Premier League almost felt destined to happen as the later weeks of the Championship season came by. The Canaries only lost six fixtures last season and won the most games with 27 victories in the second-tier. They will be a welcome addition to the Premier League next season, and there will be anticipation to see some of their star performers and how they can transition to life in the top flight.

Many will be aware of the qualities that the Canaries have but will also be well aware that they will naturally also be among the favourites to be relegated. However, there is no doubting that they are a proven Championship team, and it will be fascinating to see how they adjust to the Premier League. Their scoring record was impressive, as they netted 93 goals in the Championship last season. However, there will be question marks defensively as they conceded 57 goals last season; which was the worst of all the top three teams in the division. This youthful side will continue to improve, but it will be interesting to see whether they can continue to excel in the face of fierce competition when the stakes are the highest.

How Norwich will likely line up
Daniel Farke has proven to be an inspired managerial appointment by the club, and after overcoming a difficult start to the season, he settled on a 4-2-3-1 formation. The two holding midfielders offered insurance to let their flair players express themselves without worrying too much about their defensive duties. While the back four ahead of Premier League veteran Tim Krul will certainly excite Norwich fans as they are only getting better the more they play. Right-back Max Aarons and central defender Ben Godfrey have been revelations since joining the club and could be potential stars of the season. Club captain Christoph Zimmermann partners Godfrey in the defence and their partnership will be crucial.

The forward areas are where the club excelled last season, and the relationship between Marco Stiepermann behind Teemu Pukki flourished last season. Meanwhile, left-winger Onel Hernandez will be looking for another productive season in terms of assists. New signing Patrick Roberts could take up the right-winger position after Farke consistently rotated players in that area throughout the season.

Difficult Start…
Fantasy players would be quick to notice the difficulty level of the opening five games for the Canaries. In the opening weeks of the season they travel to Liverpool and West Ham United, and also welcome Newcastle United, Chelsea and Manchester City to Carrow Road. According to Compare Your Odds, Norwich are 18/1 to beat Liverpool at Anfield, and this shows how unlikely it is that they will get a positive result against the European champions. That is the highest price for any team on the opening weekend of the season, and as Liverpool look to better their second-place finish last term you wouldn’t expect them to get the win.

The same can be said of their fixtures against Chelsea and Manchester City; with the current champions only having lost once in 2019. However, the Canaries will already be looking forward to their first home game against Newcastle, and this could present them with an excellent chance to get their first win of the season. 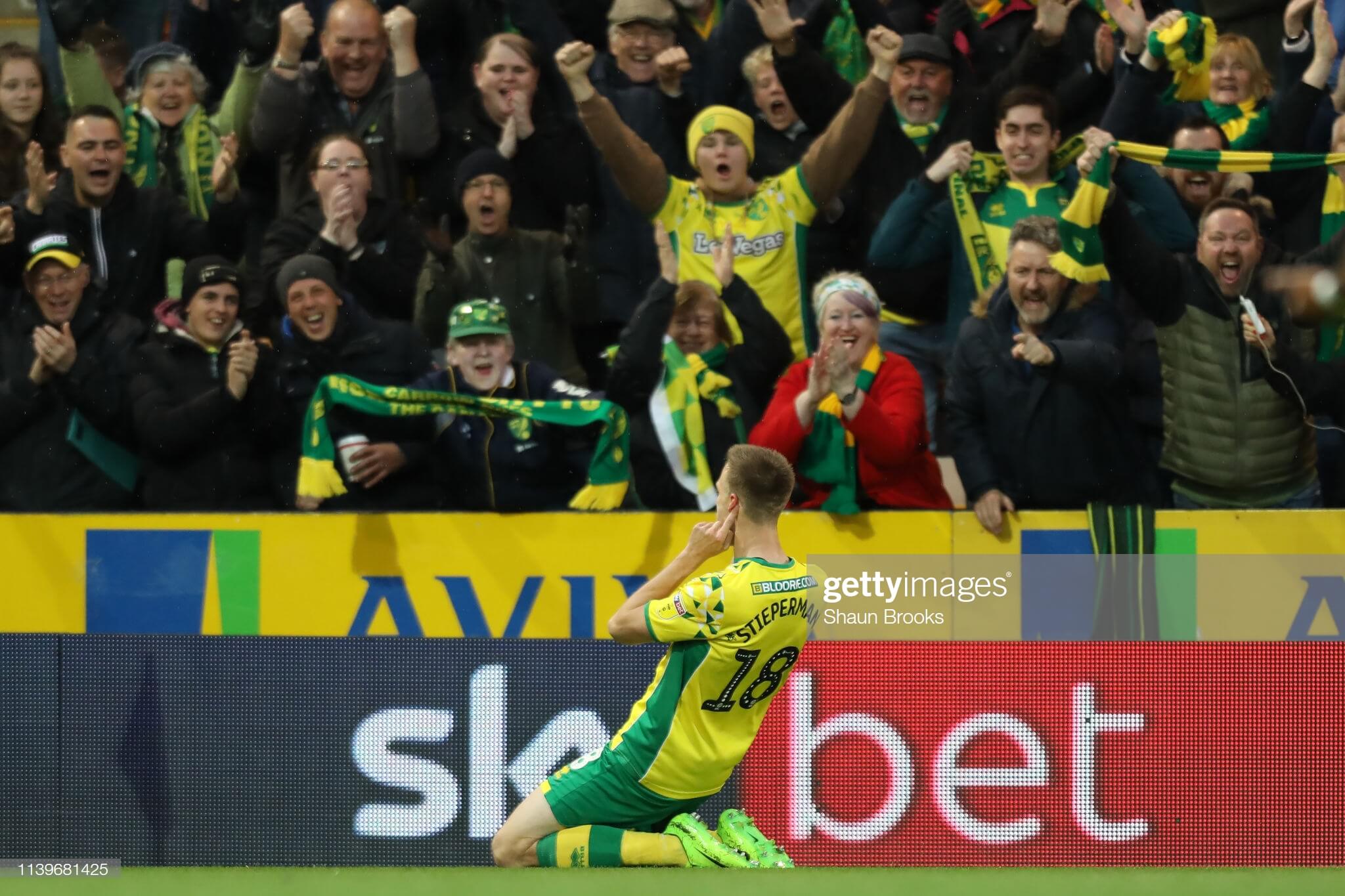 (Photo by Shaun Brooks/Action Plus via Getty Images)

Stiepermann has been vitally important for the Canaries ever since his signing from Bochum for £1.7 million. Last season he played an integral role in assisting the goals for Pukki as he played in the number ten position behind the Finn. In 43 appearances in the Championship last season he scored nine goals and contributed assists to a further eight. The inclusion of the German in the starting line-up ensured that they won 2.77 points per game when he was starting.
His importance was clear for all to see as the club drew the three games in which he didn’t play, while they lost to Leeds United and West Bromwich Albion when he started on the bench. He could be a shrewd choice for a fantasy player as he is only valued at £5.5 million and consistently provides chances for Pukki. Also, he is a guaranteed starter in the Canaries line-up due to his work rate for the team and the club have made no new signings in the number ten position. Yet. 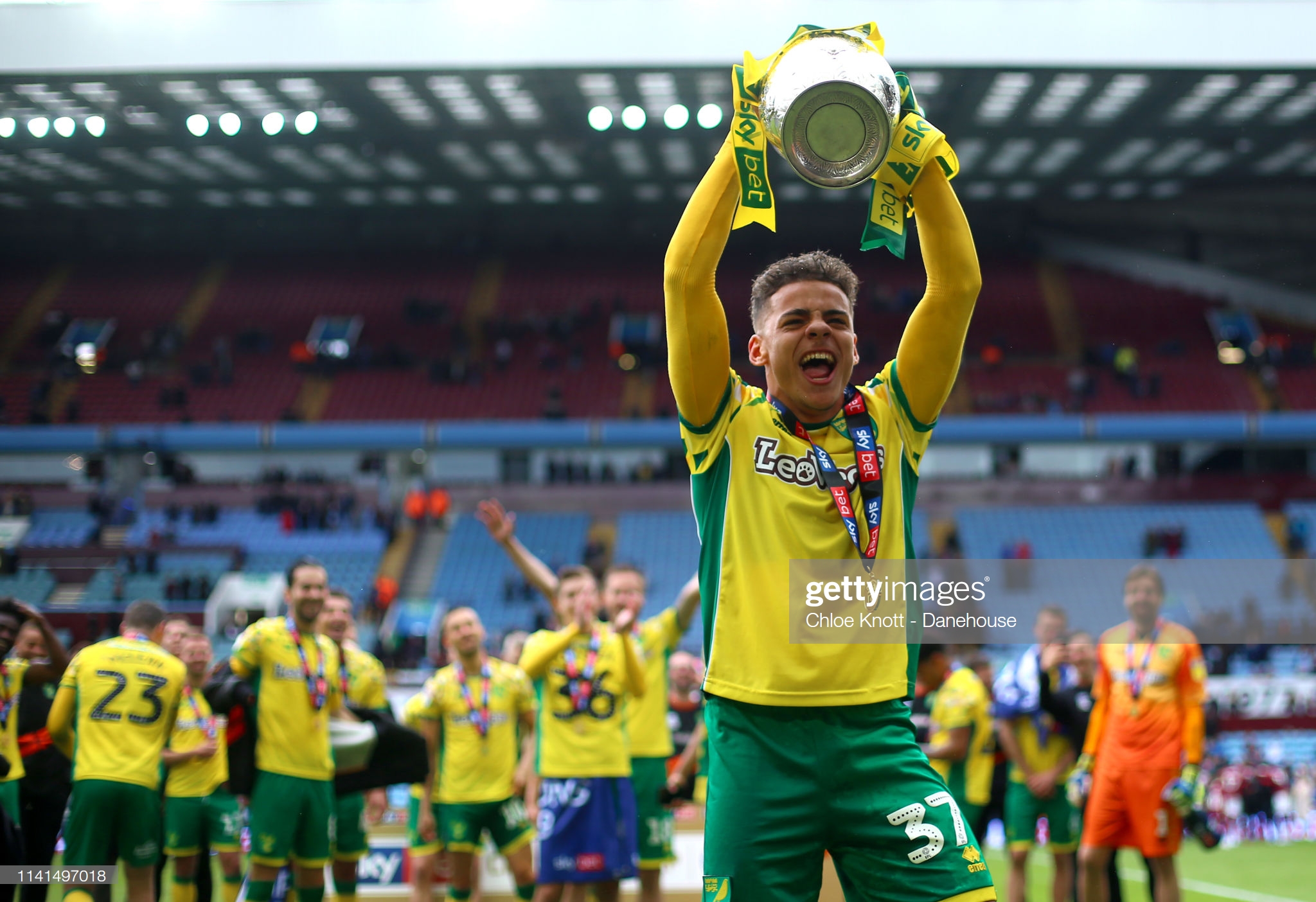 The Canaries fans will be breathing a sigh of relief that they have staved off the interest from Manchester United to keep the right-back. The 19-year-old was one of the stars of the season in the Championship last term and scored two goals in his 41 appearances. He also added six assists, which proves he is more than capable of crossing the ball into the strikers. As well as gaining promotion with Norwich, he was also named in the EFL Team of the Season and awarded the Young Player of the Season. He will set fantasy players back a fee of £4.5 million, but he has already been snapped up by 5.7% of players.

If he can seamlessly adjust to life in the Premier League, then there is no reason why he won’t excel and become comparable to last season’s Matt Doherty. Every season there is a 4.5m diamond in the rough, and Max Aarons could certainly be that man. He has all the tools that are needed to be a first-class full-back in the modern game as he is as comfortable attacking as he is in defensive areas. This is shown by the fact that he has had 24 shots on goal in the Championship last season, while he also created 31 chances for teammates. His ability to get up and down and adding width to the Canaries side will be crucial in how they attack against opposing sides in the Premier League. His aerial ability also isn’t bad as he win an average of 0.6 duels in the air per match. As a young player this quality is undoubtedly going to improve in the Premier League. 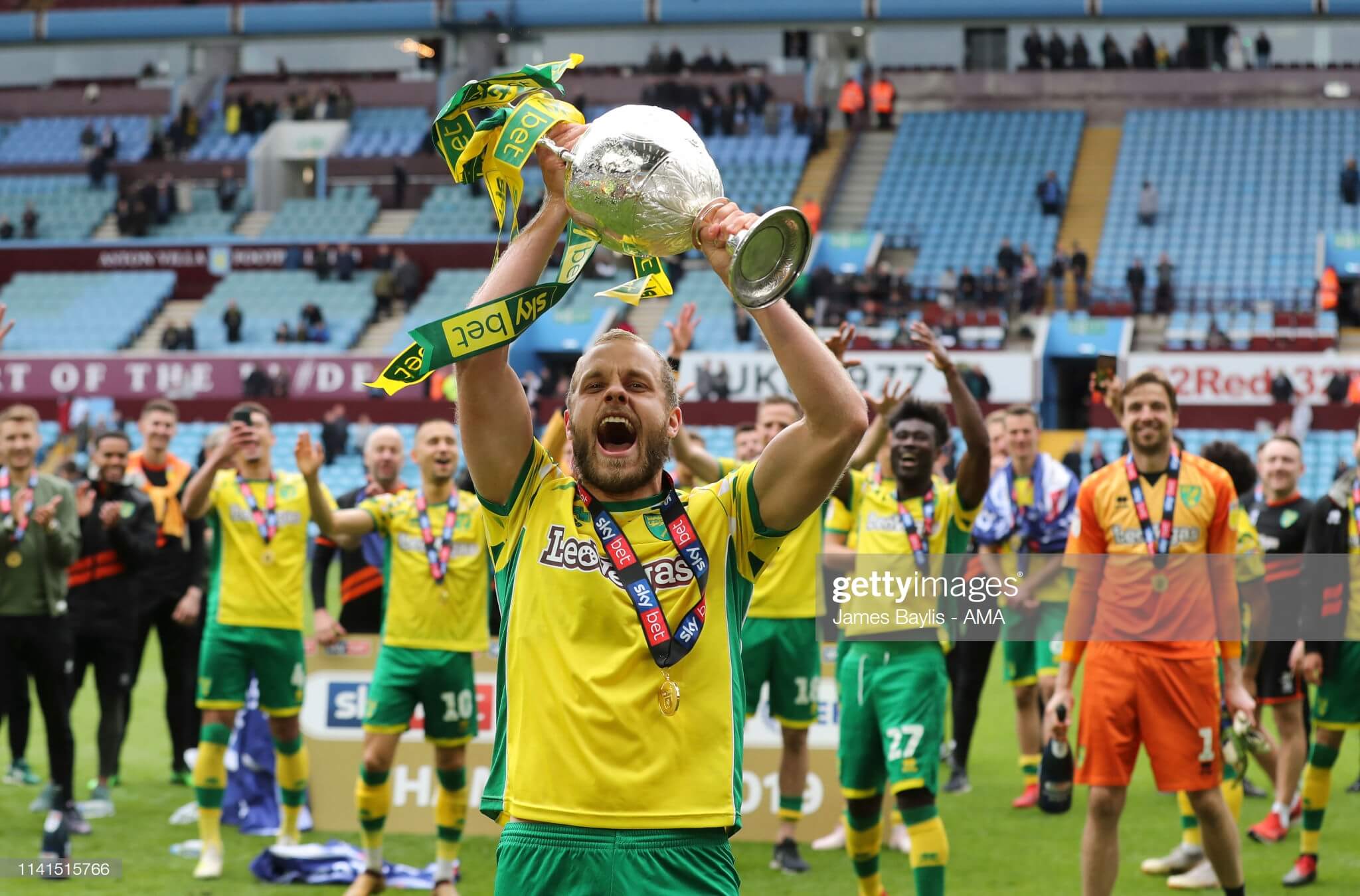 The star of the season in the Championship last term was Finland international Teemu Pukki. The expectations for the Finn weren’t exactly high after he arrived on a free transfer from Brondby. However, he defied all expectations to finish the campaign as the league’s top goalscorer with 29 goals. His performances for the Canaries saw him awarded the Championship Player of the Season, as well as being awarded with the club’s official honour.

Whether he will match his goal-scoring from last season remains in doubt, but 7.3% of players have taken a chance on him exceeding all expectations once again. At a price of £6.5 million he could a bit of a gamble considering there are other more proven strikers around the 6.5m mark such as Josh King (6.5m), or Diogo Jota (6.5m). There’s no doubt he has the capability to become a good fantasy pick, but at his price range, it’s probably best to assess Norwich and his performances in the first few game weeks. He’s currently 100/1 to finish the season as the top goalscorer, and if Norwich are to stay up Pukki will need to be the man putting the ball in the back of the net.

Thanks for reading Promoted Teams Analysis – Norwich. This article was written by James Hirlehey