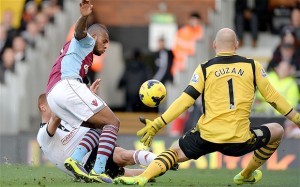 The lunch time kick-off saw Fulham face Aston Villa, who had Christian Benteke back in their starting eleven. After a recent poor run of form Dimitar Berbatov had a point to prove to his doubters and Fulham’s new Boss Rene Meulensteen was looking to put an end to a run of six straight losses for “The Lilywhites”.  Both sides came out in attacking mode and Villa’s goalkeeper, Brad Guzan, was forced into action early, producing a fine save from a Berbatov header who then had a penalty appeal turned down following a weak challenge from Ciaran Clark. Not to be outdone, Benteke, who looked desperate for a goal, forced Maarten Stekelenberg to parry an effort away. The deadlock was broken in the 21st minute when former Villain Steve Sidwell squeezed in a fine effort following good work from Ashkan Dejagah. Fulham were now full of confidence and continued to press forward and the lead was doubled on 30 minutes when Alex Kacaniklic was brought down by Leandro Bacuna and the resulting penalty was nonchalantly dispatched by Berbatov. Following the re-start, Villa brought on Aleksandar Tonev for the disappointing Karim El Ahmadi, but Fulham continued to dominate the play with John-Arne Riise, Philippe Senderos and Scott Parker all stepping up to the plate and Riise was only denied when he sent a header crashing off the bar. Villa’s Chris Herd let the dominance of Fulham get to him with a reckless challenge that earned him a yellow card and manager Paul Lambert replaced him shortly afterwards, but Villa could just not break Fulham down and when the home supporters started chanting “How bad must you be, were winning at home” he knew it wasn’t going to be Villas day.

So this was a first win for Meulensteen, who was hugely respected when he was a member of the coaching staff at Old Trafford under the tutelage of Sir Alex Ferguson and judging by today’s result, he might just be the man to turn Fulham’s season around. Todays result showed what confidence can do to a side – Fulham bossed the play but on the flip side Aston Villa looked devoid of ideas, hitting long balls to the out of sorts Benteke. 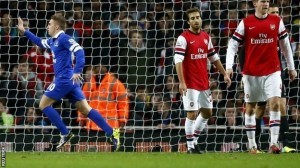 Next up was a trip to The Emirates as the league leaders entertained an Everton side who have been playing well under Roberto Martinez. Both sides had their young England midfield stars on display, namely Jack Wilshere and Ross Barkley and both sets of players set about with a determination to take the three points. The first half was a frantic, high tempo battle. The Toffees started at pace with attacking moves down each flank with Seamus Coleman and Brian Oviedo testing the Gunners defence. Arsenal were sharp with their passing, aware that a win would take them seven points clear of their rivals. To their credit Everton were not in awe of their opponents and Kevin Mirallas fired high after great work from Barkley. It was Arsenal though that had some of the best chances of the half, Santi Cazorla played in a lovely driven cross for Kieran Gibbs which the Arsenal man just failed to connect with and Tim Howard produced two great saves at the feet of Wilshere and Aaron Ramsey. The second half was a feisty affair and Referee Howard Webb had to be on his toes. Everton’s James McCarthy went into the book following a high challenge on Ramsey and will miss GW16 through suspension. Arsene Wenger decided to ring in the changes on 67 minutes in an effort to win the game, when a triple substitution saw the arrival of Mathieu Flamini, Thomas Rosicky and Theo Walcott for Cazorla, Ramsey and Wilshere.  Everton responded with the arrival of Leon Osman for Steven Pienaar and Gerard Deulofeu for Miralles. It was the Gunners though that struck first in the 80th minute when Mesut Ozil converted a Walcott assist, but just four minutes later Romelu Lukaku was adjudged to have got the slightest touch to an Oviedo cross and the ball ran onto Deulofeu, who was on hand to smash it into the net. The final few minutes were frantic and Olivier Giroud nearly won it for the Gunners with a rasping 30 yard effort that had Tim Howard well beaten, but not the crossbar. All in all this was a fantastic game of football and both sides will surely look back at it and agree that a draw was a fair result.