We have no less than 14 games to contend with this week which means that 8 teams have a double. If this is news to you at this stage then you’re waaaaaaay behind the curve. Man City go first again as they host Spurs in what is one of their two perceived ‘tough’ games and it’s fair to say it could be a title decider, in theory. We then have 4 games at 3pm; Jekyll and Hyde Bournemouth host a similarly unpredictable Fulham, Huddersfield bend over for Watford, West Ham and Leicester argue over which one could now care less and Wolves will be fearful of the Irish Ronaldo aka Duffy as Brighton visit the Midlands. Newcastle celebrate being ‘safe’ in the late game against Southampton who are hoping to have a similar party of their own anytime soon.

There are 3 games on Sunday but oddly 2 of them clash at 4pm. Everton and Man United is the early outlier before Arsenal enjoy home comforts against Palace and then finally Liverpool get their chance to respond to whatever City did by hammering Cardiff.

Monday completes the set of 10 ‘normal’ games with Chelsea hosting Burnley and many a fantasy manager will be hiding behind the settee having sold Hazard for someone far less expensive just because they have two games in a week.

Speaking of which… the ‘doubles’ begin on Tuesday with Spurs v Brighton and Watford v Southampton followed on Wednesday by Wolves hosting Arsenal, before Man City’s second ‘title decider’ in one week (unless they already stuffed the first one up!) as they visit Man United. 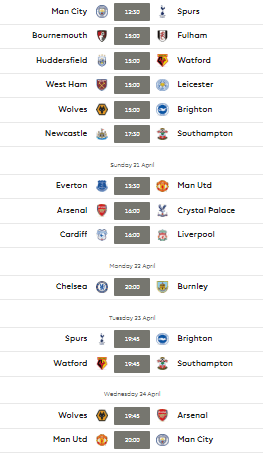 Good luck to absolutely everyone for Gameweek 35 from all at FF247! 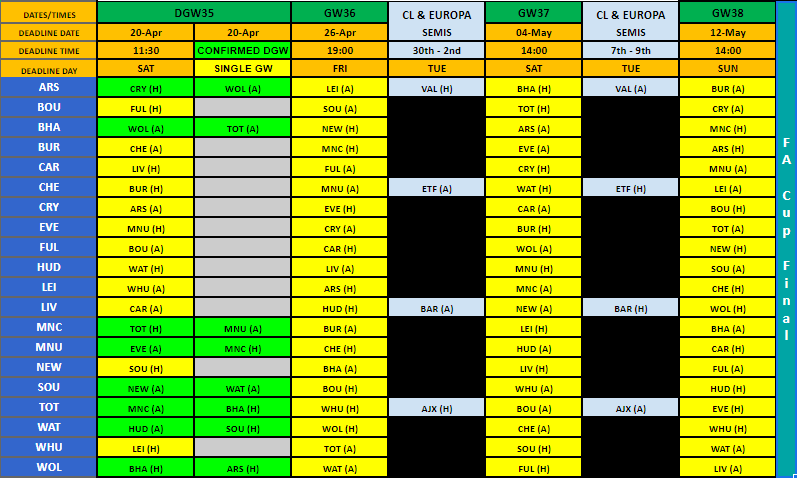