Welcome to FF247 Fantasy Football Site Team; The Season Wrap Up.
GW39…. What’s the opposite of teambuilding?

We’ve all been there; be it at school, at Cub Scouts, at work or as part of a sports team. Some bright spark decides it’s raft building day in the naive hope that this somehow will strengthen bonds and ties and bring you all together into some sort of seamless unbeatable unit. Cue 11am on the edge of a freezing river and there are two distinct schools of thought already at play. The alpha males are out in force with their lofty ideas, staring one another down whilst some others stand back shrugging their cold shoulders with indifference and some others are cowering under the trees hoping nobody notices that they are even there. Some begrudged give and take occurs and an hour or two later a hybrid version of the plans is seemingly under way. Or so it appears anyway, planks are placed, planks are sneakily replaced, ropes are tied, ropes are deviously untied. Eventually the thing looks seaworthy and is pushed out on it’s voyage. Half way across the lake it looks like falling apart and casting it’s entire occupancy to the depths but ultimately the crew see the bigger picture and finally begin to work together to ensure they make it to the other side.

GW38 Round up
We shall begin as ever with our usual analysis of last week which saw us finish on 67 points, 16 above the overall average of 51. But without boring you to tears with the detail, 4 players performed (TAA, Mane, Kun (c) and Zaha), with a total of 52 between them, you can do the math and probably fill in our swear words to describe how the other 7 fared. 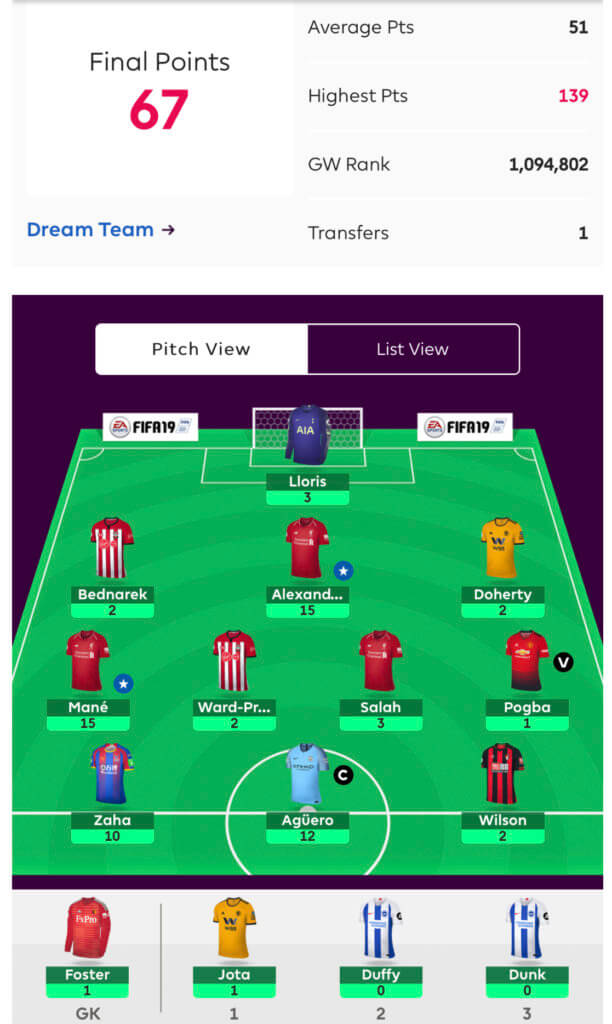 Final Standings
The above resulted in our 15th green arrow since GW19, which may sound fantastic but it was a slow and steady rise to say the least! We were 84,654th prior to that and ended up at 5,757th come the end, with 2,406 points overall. We achieved our highest season rank in GW38 itself which is always a good point at which to peak, and we beat our best ever overall rank, albeit by just a couple of hundred places. Anytime you set off on this journey the hallowed (for whatever reason!) Top 10k seems to be a reasonably accepted aim for success, we prefer to think that to beat your own personal best, be that 5k or 50k or 500k is a more reasonable target to set yourself. To that end, and with that excuse placed conveniently in our pocket, we achieved our goal.

Mini-league wise we don’t play in many, in fact the only two we even look at are the FF247 Contibutors League (the writers / wider team) and the Ryder Cup (GB&I vs the MLS lot). We won the former which is always pleasing, as it keeps them all in their place and we came 2nd in the latter, which was a bit disappointing but we beat the Yanks as a team so every silver cloud and all that.

Apparently we won the FF247 Division One Head-to-Head league too, gaining promotion in the process. Although we must admit (sorry Elle!) we hadn’t even noticed we were in it!

See you next season!
We appreciate it’s a bit of a pointless article, but who cares and all that, we just wanted to give you the final synopsis given as we know that many do follow it with interest along the way, and we are grateful to everyone who does.

We have an interview article in the offing with Pele (not that one!) who won the FF247 Regulars League and then after that we shall probably take a small but well earned break as we recharge our FPL batteries ahead of next season.

See you all soon!

Thanks for reading FF247 Fantasy Football Site Team; The Season Wrap Up