Welcome to Harry and Lloyd’s Predictions GW38. The final game-week of the FPL season is finally here, bringing to a close another season of predictions here at Harry and Lloyd’s. What started as a way to pass the time in a long winter game-week last season, has turned into a fully functioning ongoing affair with over 100 participants and we salute each and every one of you!

We head into ‘Championship Sunday’ with the majority of the Premier league’s key battles already decided, but who would bet against one final twist in what’s been quite a week for football with season-defining moments from Manchester City, Liverpool and now Tottenham in the last 3 days! Over here, the chances of last-minute drama seem unlikely. Last seasons winner DenPerryDidIt has once again spent the majority of the season in the top spot, and with a 16pt lead it looks likely he’ll once again claim the title. How does he do it? Your guess is as good as mine. It’s not easy, if it was we’d all be laughing all the way to the bank, let’s just hope DenPerryDidIt puts his talents to use elsewhere and is mugging off the bookies left, right and centre.

Back to this week. Red Robbo is our winner with 12 pts, PM was close with 10pts to take the second spot and sharing third we have Eresh and GoalMachine. Nobody nailed the 1st GS which is no suprise given that it was an OG by Ben Mee.

And so; Many Congratulations to Red Robbo. Please email us here; contact@fantasyfootball247.co.uk to claim your prize.

THIS WEEK’S COMPETITION… Scoring couldn’t be simpler: Correct Score = 3 points Correct result = 1 point Correct First Goalscorer of the game-week = 5pts (Points are awarded on an ‘either/or’ basis, so you’ll either score 3 points for a Correct Score or 1 point for a Correct Result, these are never added together for a 4 point score.) Tie-Breaker In the event that two or more members are tied as winners for the week the overall winner of the t-shirt will be decided by a tie-breaker. In order to do this, we ask that you also post your prediction of the time that the first goal of the week will be scored at. Nearest the pin wins.

The Rules… They are few; 1 entry per person and all entries must be submitted prior to the first game of the game-week. Kick-off this week comes on Sunday at 3:00 pm. Once all the games have been played, we’ll count up the scores and the winner(s) will be announced in the following week’s competition article and each week our winner will walk away with an FF247 branded t-shirt! ). So just to recap all you need to do is; – Copy and paste the fixtures from below and pop your score prediction on each. – Tell us who you think will be the first goal scorer of the week (and that can be from any game regardless of your other predictions) – Add in your time of the first goal of the week for any potential tie-breaker situation.

GW38 Deadline is: Sunday at 3pm

League Table – This is correct as of this week, thanks to DMC and his willingness and wizardry! 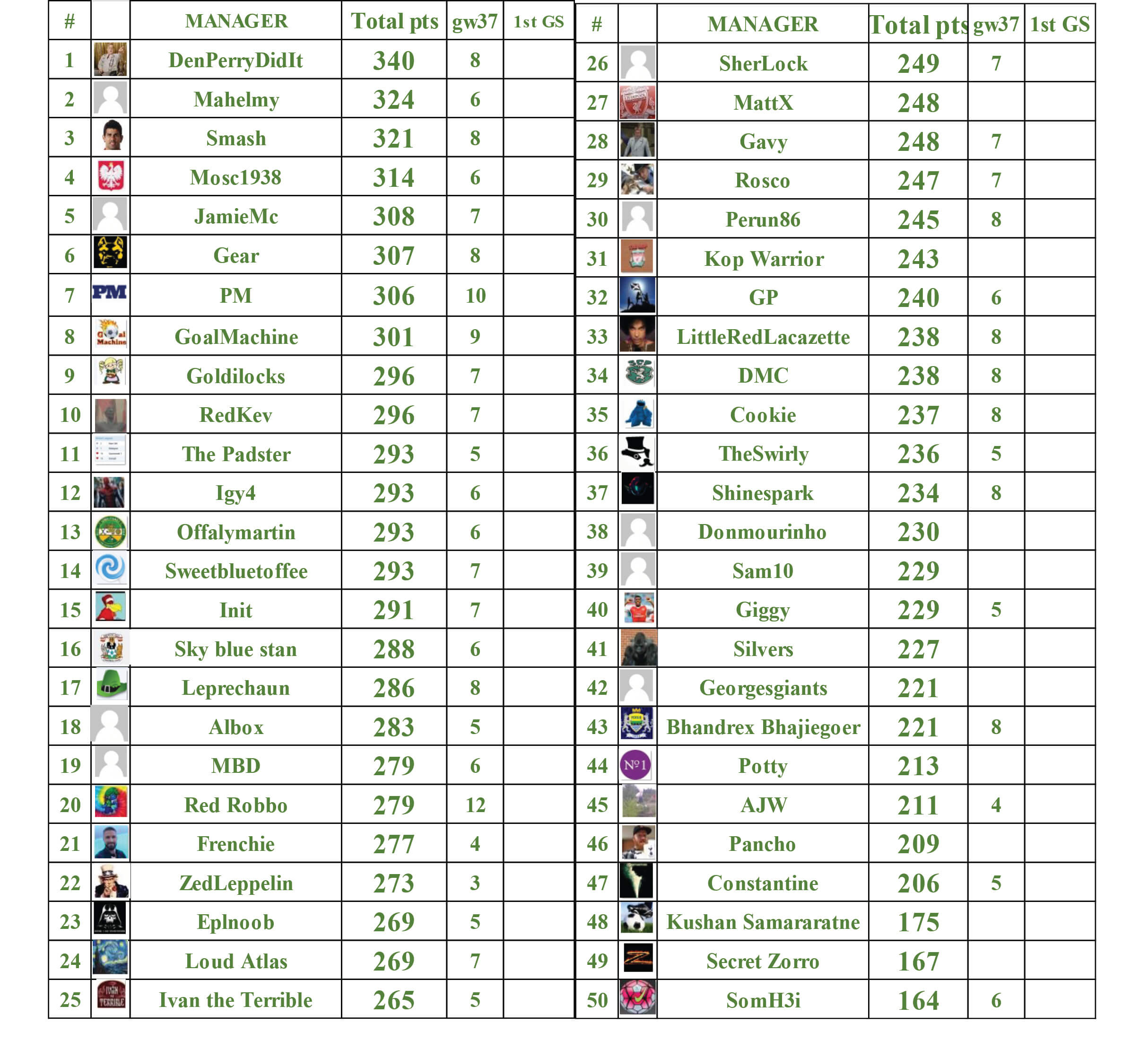 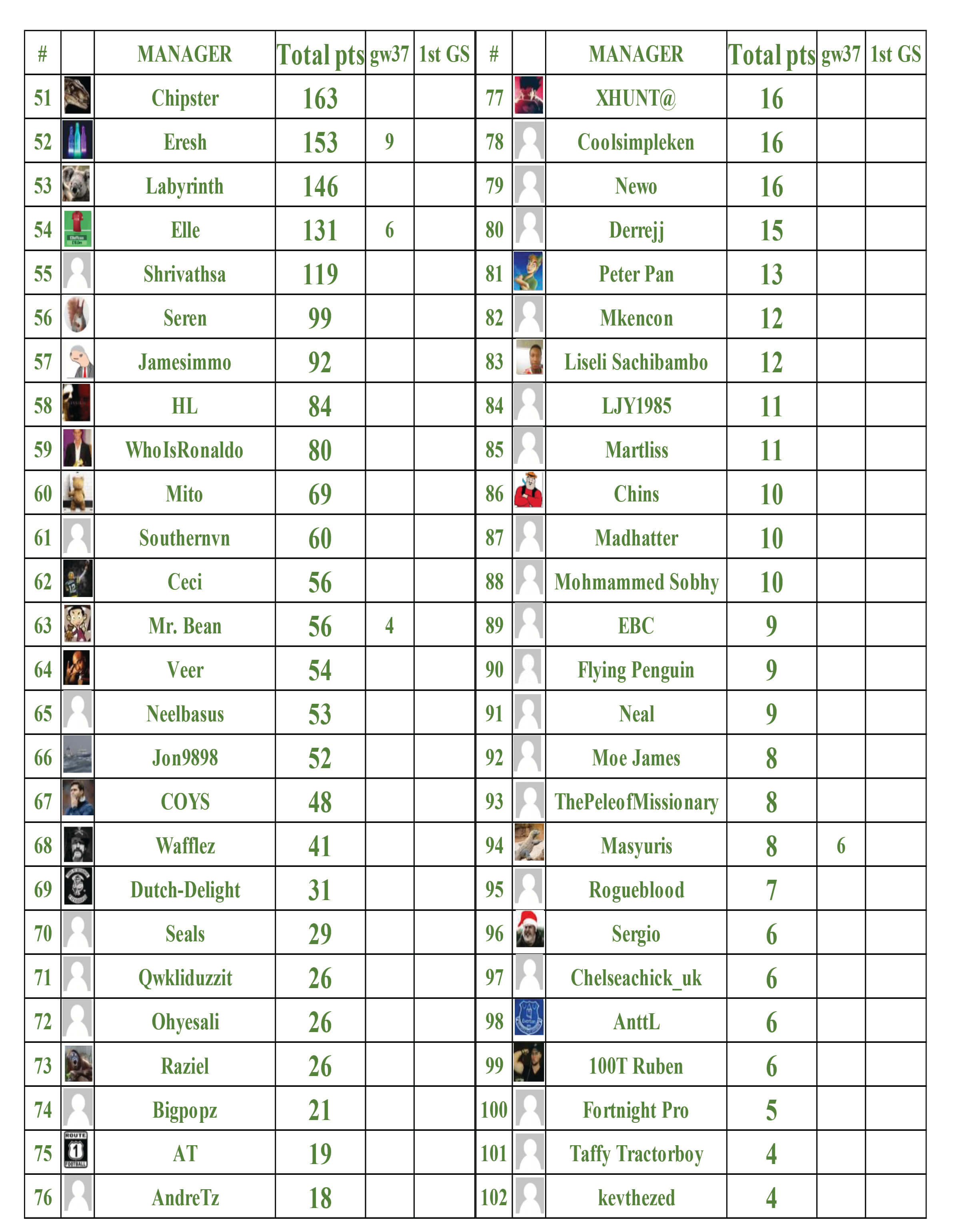 Thanks for reading Harry and Lloyd’s Predictions GW38