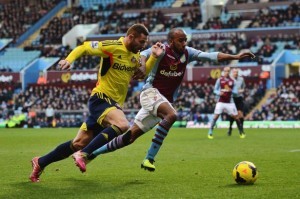 Prince William was in attendance this afternoon, as he made his first ever visit to Villa Park, but even he could not influence this dour encounter. Sunderland’sEmanuele Giaccherini wasted the chance to be king for the day and will need a royal pardon from manager Gus Poyet for an awful miss in the first half. This was far from a royal performance as the home side struggled against a team who have been woeful on their travels and it proved to be a forgettable experience for the Duke of Cambridge as Christian Benteke produced another anonymous performance and has now gone six games without scoring, cheers greeted his substitution four minutes from time. Benteke had gone close in the 34th minute,Karim El Ahmadi pulled the ball back for Ashley Westwood and he laid a pass off to Benteke who pushed an effort a yard high, fantasy managers who still have him will be hitting the transfer button soon.  To sum this game up, both sides produced performances full of erratic passing and slovenly finishing. 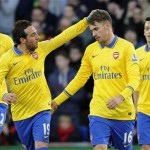 Arsenal increased their lead at the top of the table with this comfortable win away at Cardiff. Aaron Ramsey was the scorer of the first and third goals and his efforts were applauded by the home crowd. Arsenal could have gone ahead as early as the second minute when Jack Wilshere clipped a shot against the Cardiff bar and the Gunners definitely should have gone ahead midway through the first half when Mesut Özil put Olivier Giroud clear on goal only for the Frenchman to stop, believing he was offside which he never was. By the time Giroud realised he was free to play on it was too late as Steven Caulker had tracked back to cover. Always play the whistle Olivier! On thirty minutes the deadlock was broken as Ramsey rose near the penalty spot to divert Özil’s cross beyond David Marshall with a perfect header. Ramsey kept the celebrations to a minimum against his old club though and the home crowd were generous with their applause. The remainder of the first half and most of the second one were a cagy affair until the 86th minute when Arsenal substitute Mathieu Flamini rolled his sleeves up (I hope you all get this), latched onto another Ozil assist to whip a first-time shot past Marshall into the Cardiff net. The script was now written for a final Coup de Grace to be delivered when Theo Walcott broke on the counter attack to lay it back for Ramsey to hammer a shot into the top corner. The Cardiff crowd serenaded him with ‘there’s only one Aaron Ramsey’ and he responded with the Cardiff ‘Ayatollah’ celebration. 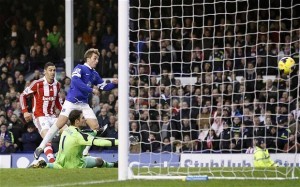 This game was all about the performance of Gerard Deulofeu who was starting a Premier  League game for the first time since signing from Barcelona last summer. The 19 year old winger, who impressed as a substitute last weekend scored the opener; supplied the second, then took the corner that led to Everton’s third. It all started on 45 minutes when Deulofeu, the boy with the magic feet played a one-two with Gareth Barry and rifled a shot in at the near post and then did a Gabriel Batistuta ‘machine gun’ celebration. Next up Deulofeu picked out Barry with a pin-point cross and, while the midfielder’s touch was poor, the ball broke for Seamus Coleman to finish. Everton’s third ensured they had the rarity of both full-backs scoring goals. After Deulofeu cut a corner back to the edge of the area, Bryan Oviedo drilled in his first Everton goal via the inside of the post. Scorer then turned supplier when Oviedo, covering for the injured Leighton Baines, set up Lukaku for his fifth goal in as many games to complete Everton’s biggest win under Martínez. Now who says David Moyes is missed at Everton. 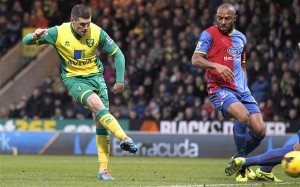 Tony Pulis commenced his managerial reign as Crystal Palace manager but it wasn’t a case of “Lets Be ‘aving you” as Norwich’s Gary Hooper scored the only goal in this encounter to give maximum points to Chris Hughton’s outfit. The pre-match talk at Carrow Road was that a defeat could spell dismissal for Hughton but he was rewarded for key team changes when his £5 million summer signing Hooper bagged the winner following great work by Nathan Redmond who started the move that lead to the goal with a fine run down the right, his ball across reached Wes Hoolahan, who laid it on a plate for Hooper to crash home from seven yards. Pulis’ first game as manager of Palace was promising in the quality of football that his team produced but the lack of a cutting edge that has restricted them to seven league goals this season was clearly evident. The Norwich pair of John Ruddy and Martin Olsson combined well to keep out Barry Bannan as his goal bound header was cleared off the line and up on to the bar. Pulis made three changes, but the closest he came to seeing his side equalise came when Jimmy Kébé pulled a shot wide with six minutes remaining. The result leaves Palace with their worst points tally after 13 games of a Premier League season. They have been relegated in all their previous four top-flight campaigns! 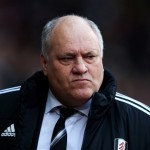 Second-half goals from Mo Diamé, Carlton Cole and Joe Cole heaped the pressure on Martin Jol as West Ham brushed aside a poor Fulham side. The first half was dire to say the least and it appeared to be meandering towards a 0-0 draw. By the end though, West Ham had scored three times and this could be the straw that broke the camels back for the Fulham manager. West Ham had been the more energetic team, and their goal just after the break was due reward. Diamé robbed Steve Sidwell and hit a low shot that was deflected by Fernando Amorebieta. It was their second goal at Upton Park in six weeks. As the home team continued to press Fulham faded further. West Ham’s second came with eight minutes to play, Carlton Cole, a second half substitute, scored with his third touch, tapping home from Downing’s cross. The third, swept home by Joe Cole, confirmed West Ham’s complete superiority by the end. Fulham failed to have a shot on target all match and Jol attempted to arrest this with 12 minutes left by sending on the 36-year-old defensive midfielder Giorgos Karagounis! This was Fulham’s fifth league defeat in a row and they have now lost 16 of their last 24 matches in all competitions. The Fulham owner, Shahid Khan, is known for his patience, I imagine that is being severely tested at present. 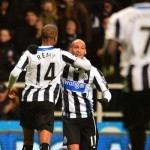 Question-who are the only team to win all four of their Premier League matches in November? ………………..Newcastle United, that’s who! After a fine fun of form, during which they’ve seen off two title hopefuls in Chelsea and Spurs, Alan Pardew’s side demand some serious attention: they’re a mere eight points off top spot. Todays win saw Newcastle move up to fifth in the Premier League table with victory over West Brom. Yoan Gouffran scored for a third successive match at St James’ Park following a corner from Yohan Cabaye to make it four wins out of four in November for Alan Pardew’s side. West Brom’s Chris Brunt lashed home the equaliser on 53 minutes latching onto a flick on from Shane Long. Moussa Sissoko stole the headlines with the winner on 57 minutes, his driven shot following a clever header from Loic Remy gave Boaz Myhill no chance. Despite a game effort from the Baggies, Newcastle held on for a deserved win.